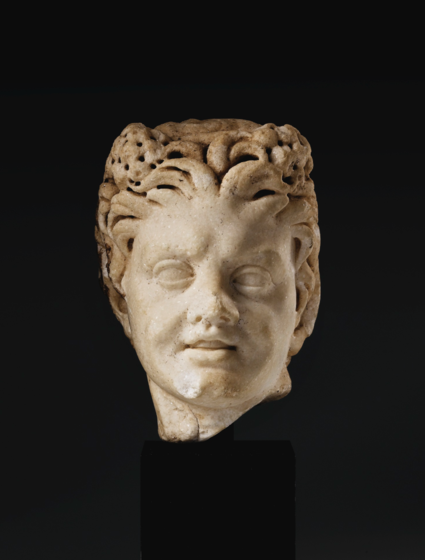 During the Roman period, the terms ‘satyr’ and ‘faun’ are generally used interchangeably and refer to rustic demon spirits of the countryside and woods. In Greek mythology and art, satyrs were represented as ithyphallic men with the ears and tail of a horse, but the Roman tradition saw them conflated with the goat-god Faunus, and they instead assume the ears, horns, legs and tail of a goat. Both satyrs and fauns were the close companions of Dionysus and Bacchus respectively, and thus participants in the drunken revelry that characterized the cult of the wine-god.

Early representations of the satyr in Greek art depict an ugly and ageing subject (Silenos), reflective of the wild and subversive nature of this hybrid creature. However, during the Late Classical period, a ‘humanization’ of the satyr occurs, with the savage features softened into a more youthful and graceful aspect. The present head is one such example of a Roman interpretation of the youthful satyr epitomized by the work of the celebrated fourth century BC Greek sculptor Praxiteles. His satyr anapauomenos (‘satyr at rest’), now lost, but known through Roman copies, reinvents the traditional image of the satyr, replacing the hybrid form with the lithe frame of a nude young male. He is distinguishable as a satyr only by the panther skin slung over his torso and by his long, bushy locks.

Similarly, the present head is picked out as a satyr or faun by his thick wavy hair, bound with a fillet adorned with berry clusters, and by his impish expression. His childlike features retain something of the mischievous nature associated with these woodland creatures. Full-length statues often depict the satyr playing the flute, a common attribute of rustic deities, carrying wineskins or cavorting with animals and nymphs, and would likely have been commissioned by wealthy Romans to adorn their villas. Satyrs symbolize man’s connection to the natural world, fertility, playfulness and the inversion of social norms, themes central to important festivals in the Roman calendar, such as the Saturnalia.

For a similar satyr head in the collection of the Vatican Museum, B. Andreae, ed., Bildkatalog der Skulpturen des Vatikanischen Museums, vol. I.3 (1994), pl. 1033.

A concise discussion of Praxiteles and his Pouring Satyr is presented by O. Palagia and J.J. Pollitt, Personal Styles in Greek Sculpture, eds. (Cambridge, 1996), pp. 110-113.

For an overview of the satyr and its place in Greco-Roman tradition, R.A.S. Seaford, ‘Satyrs’, in S. Hornblower and A. Spawforth, The Oxford Companion to Classical Civilization (Oxford-New York, 1998), pp. 638-639.