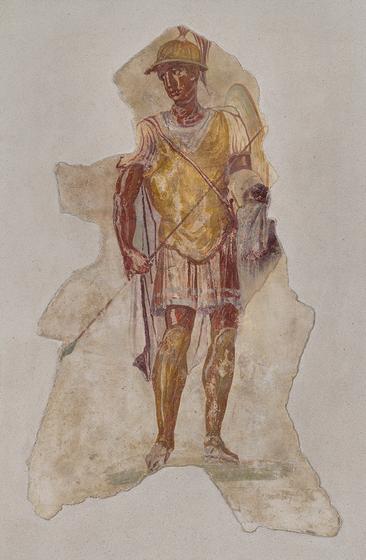 This painting of a soldier in Macedonian armour is most probably a depiction of Alexander the Great. Youthful and idealized - and outfitted in the style favoured by the Macedonian army - the soft, oval face, pursed mouth, and strong gaze bear a resemblance to the accepted iconography for portraits of Alexander the Great. The consistency of his images reflect the great reverence and popularity that developed from the time of his first commissioned portraits by the fourth century sculptor Lysippos, to the cult images of Alexander in the Roman period, of which this fresco is a good example.

The Fresco in Detail
Alexander is shown standing with his weight on his left leg and his right leg drawn slightly back. He holds a spear in his lowered right hand and a shield with the left. While the end of the spear is lost, it is very likely that the full fresco would have depicted a very long weapon, identifiable as the Macedonian sarissa, or long thrusting spear.  This type of spear was invented by Philip II, Alexander’s father, and became the Macedonian weapon par excellence. Used in conjunction with the phalanx formation, Alexander’s armies were practically unstoppable, conquering most of the known world.

Alexander is presented in full military attire, wearing greaves, a muscled cuirass, tunic, a sword strapped to his side, a crested Boeotian helmet and a cape. His body armour is accurately rendered and expertly painted using yellow highlights to suggest volume and to indicate that it was made of bronze. His flesh was painted a dark orange-red with white highlights, again to suggest volume. This was the typical technique used by Roman fresco painters when representing the tanned skin of a man; there are numerous examples from Pompeii.

This fresco was skilfully painted with a sure hand. The quickness of the brush strokes has given Alexander a sense of energy and life. The man’s figure is slender with a slim body, long legs and small head. These recall the proportions introduced and made famous by the Greek sculptor Lysippos, active around 330 BC and chosen by Alexander the Great to be his official portraitist.

Historical Significance
Although we cannot be absolutely certain, it is most probable that this figure of a Macedonian may be a representation of Alexander the Great. There are a number of intriguing clues. The fact that he is clutching a spear could be a reference to his victory at the Battle of Gracinus, since it was there, at the Temple of Artemis at Ephesus that he consecrated the weapon that was responsible for his success. The helmet he wears is the Boeotian type worn by the Macedonian military. This type can be found on the Alexander Sarcophagus (Istanbul) and on the Alexander mosaic depicting the Battle of Issus (in the Naples Museum). The man’s face with his deep-set eyes, pronounced brow, and straight nose also recall the facial features of Alexander found on the head of the so-called Alexander Azara Herm and the portrait of Alexander on the coins of Lysimachus. The face is imbued with feeling, and a sense of emotion is carried in his gaze.