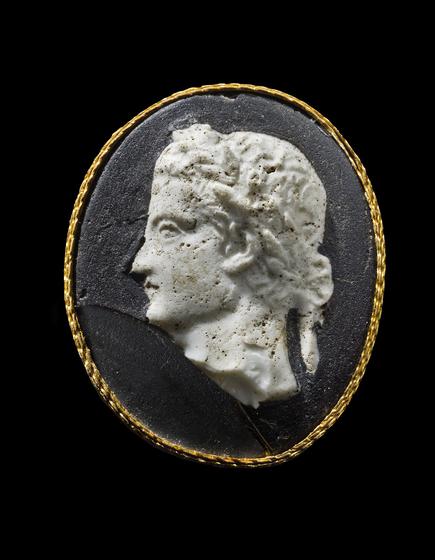 This phenomenally well preserved and compelling glass cameo is sensitively carved with a left profile portrait head of the Roman Emperor Caligula. The young Julio-Claudian ruler, born in AD 12, was officially named Gaius Julius Caesar Germanicus, and was nicknamed Caligula or ‘little boots’ as a child by the army commanded by his father, Germanicus. Caligula held a brief and tumultuous reign from AD 37-41, which became increasingly more tyrannical, culminating in his assassination. After his death, the senate voted to condemn his memory (damnatio memoriae) and not to have him deified, denying him the honour afforded to all other deceased emperors. As a result, many of his portraits were destroyed or recarved, and, unlike his predecessors and successors, he was not commemorated in posthumous depictions (see, for example, a cameo of Caligula recut as Claudius, Kunsthistorisches Museum, Antikensammulung, Vienna, IXa.23).  Therefore, comparatively very few portraits of Caligula have been preserved, making this cameo portrait in the delicate material of glass all the more exceptional.

Caligula was in his twenties throughout his truncated sovereignty. As such, his typically-idealized official portraiture portrayed him at his actual age, rather than more youthful, as many of the middle-aged emperors had chosen. In idealizing his visage, however, his portraiture presented him with a more robust head of hair than the receding hairline Suetonius would report in The Twelve Caesars some ninety years later. The present cameo was part of

Caligula’s first official ruling portraiture type, created around the time of his accession and his first year in power, circa AD 37-38.  This is the most canonical of his portrait types and corresponds to sculptures in marble and coins alike. He is shown in these portraits, as here, with facial features that tie him to his predecessors, exhibiting their familial relationship through his typical Julio-Claudian coiffure, square jaw, and high forehead.  However, his hollow temples, straight nose (rather than aquiline, like Tiberius), golf-ball chin and protruding upper lip are recognizable on this portrait and others as unique to Caligula alone. He is portrayed wearing the corona civica (crown of oak) to commemorate his newly assumed role of pater patriae (father of the country), as his predecessors had done before him.

This cameo is one of a class of miniature imperial portraits that was designed to honour Caligula’s early principate and to validate his appointment as well as his inheritance from Tiberius. There are similar cameo portraits that pair Augustus and Tiberius, and it is possible that this cameo was originally paired with one of Tiberius to celebrate this peaceful passage of power.

Glass became a popular medium for important gems in the first century. Glass production had reached its apex, with pioneering techniques being used to imitate stone. Some of the most innovative and deluxe examples of Roman glass are cameo glass, whereby a matrix, usually of deep blue, was dipped in white and then meticulously carved down. The finest such examples, including vessels, plaques and gems, were produced in the earliest decades of the empire, through the Augustan and Julio-Claudian periods, primarily in workshops centered around Rome. The most celebrated of the type is the Portland Vase in the British Museum. This craft was inspired by vessels and gems carved from layered stones, such as sardonyx. Far more fragile, the glass examples were remarkably more difficult to produce. However, they provided more evenly distributed layers, and, as such, artisans working the glass examples were not constrained by the uneven natural veins in stones. These magnificent products were highly sought after as a luxury by the most elite Roman citizens.

Small cameo gems, such as the present example, were not only a recognizable symbol of wealth and extravagant taste, but they were worn in public to promote one’s affinity for political powers or devotion to deities.That practice was taken so seriously that it was even reported to be considered a crime to wear a ring with the likeness of the emperor in an impure locality such as a brothel or toilet (Seneca, On Benefits). Fine stone medallions and cameo gems, with their high polishing still intact, continue to be celebrated today for their uncompromised beauty and exceptional state of preservation. The glass examples, like this Caligula gem, are far rarer due to the inherent fragility of glass and its susceptibility to the elements of burial. A glass cameo of this size, completeness, and state of preservation is astonishing in itself, let alone for an emperor with such a short reign and compromised tenure.

This outstanding gem is all the more remarkable for its noteworthy pedigree. It comes from the distinguished private collection of antiquarian Giorgio Sangiorgi (1886-1965), a proprietor of the Galleria Sangiorgi in the Palazzo Borghese in Rome. Sangiorgi has been especially celebrated for his legendary collection of ancient glass, which he assembled in the late nineteenth and early twentieth century, much of which he acquired throughout Europe and never imported into Italy. He published a large number of these objects in an enormous tome in 1914 (Collezione de Vetri Antichi dalle Origini al V Sec. D.C., ordinate e descriti da Giorgio Sangiorgi con prefazione di W. Froehner). However, the collection was constantly growing and evolving, even through to his latest years. Much of the collection was sold around the time of his death in the 1960s and now resides in some of the most prominent public and private glass collections in the world, including the Corning Museum of Glass. Christie’s held a landmark sale of a significant percentage of the collection in June 1999. This extraordinary glass cameo medallion of the Emperor Caligula is a testament to this feted collection.

R.S. Bianchi, B. Schlock-Nolte, G.M. Bernheimer and D. Barag, Reflections on Ancient Glass from the Borowski Collection, Mainz am Rhein, 2002.