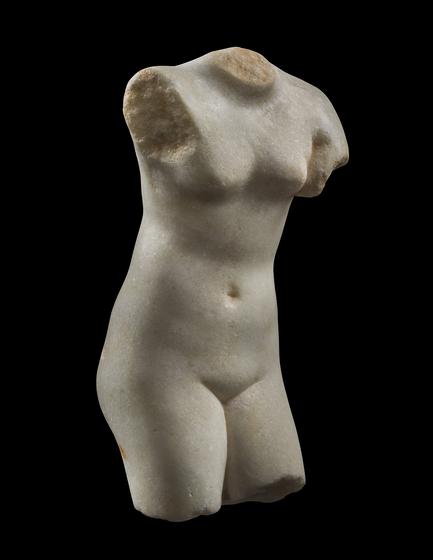 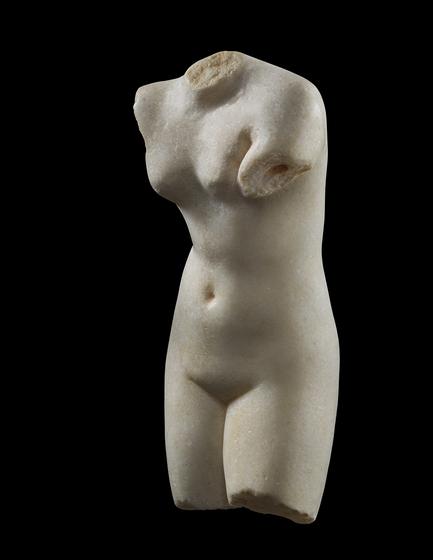 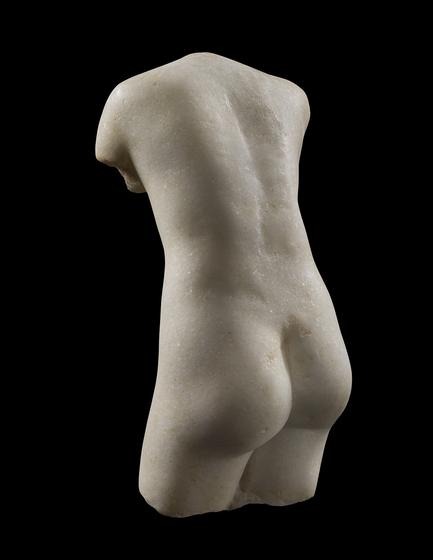 This striking statue of the goddess Aphrodite captures her physical beauty with charming grace. The figure is at once naturalistic, but calculated to produce the optimal effect while highlighting her delicacy its through exquisite workmanship.  Her nude torso has a silken texture that captures soft shadows. This is a highly sophisticated work of art that raises the human form to the level of divinity, yet portrays the goddess in an intimate, human situation.

Once Greek artists broke with tradition and created nude female statues (c. 350 BC), they became one of the most frequently depicted subjects in Greek art. Standing as a counterpoint to the draped female figure and as counterpart to the nude male, the nude female was most often expressed as Aphrodite, the goddess of love and beauty. As one of the oldest of the Greek gods and one of the original Olympian deities, she was the perfect mythological subject for artists concerned with depicting the perfect female form. Artists reveled in creating dramatic compositions that not only portrayed the goddess nude, but also justified her lack of clothing.

The earliest known statue of the nude Aphrodite was created by the artist Praxiteles and portrayed her at the bath. This work, named the Knidian Aphrodite (c. 350 BC) from the island on which it was located, launched a revolution in the portrayal of the female figure. Other themes followed that played on the goddess’s imagined private moments.  In this wider context, the simple image of a woman drying or arranging her hair took on new significance.

Thus, the so-called Aphrodite Anadyomene theme portrayed the goddess either wringing out her wet hair as she emerged from the sea after her birth or after her bath, presumably in preparation for a lover. Such intimate emotional moments were matched by the artists’ keen attention to detail and their desire to make these images as sensual as possible. The goddess, as the ideal of feminine beauty is meant to fill the viewer with desire. Subtleties of pose and the soft caress of modeling transport the action to a higher level and transform the cold marble into a material that longs to be touched.