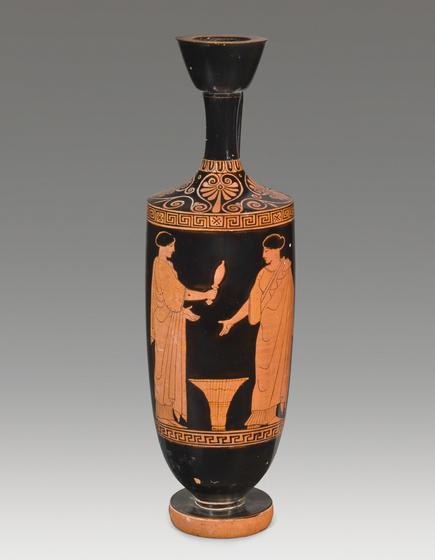 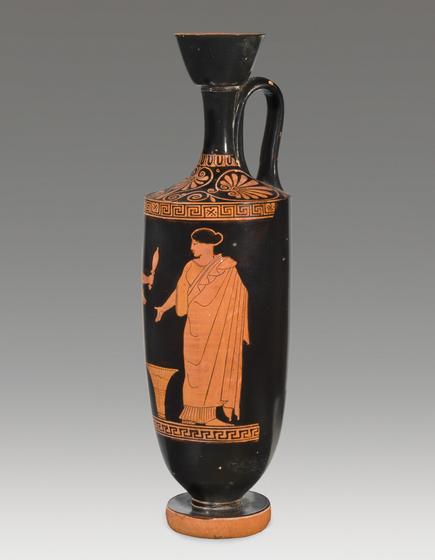 This elegant, long and slender-bodied vessel with a tall neck and thick-rimmed mouth is known as a lekythos; it functioned in the ancient Greek world as a container for oil. Particularly during the height of Greek vase painting, in the fifth century BC, the narrow field for figurative decor on these slender vessels presented a compositional challenge and opportunity for some of the most accomplished vase painters in Athens. It was the perfect canvas for the simple yet sophisticated two-figure compositions so characteristic of the celebrated artist known today as the Achilles Painter.

The Achilles Painter flourished chiefly in the mid fifth century BC, when he excelled especially in the red-figure and white-ground techniques, both of which emphasized his exceptional draughtsmanship. The Achilles Painter was the most famous student of the renowned Berlin Painter, and his penchant for refined minimalism derived from his master.

The present example showcases the Achilles Painter’s fondness for scenes composed of two female figures, which are found most often in his white-ground lekythoi. These scenes have been categorized by scholars as ‘a mistress and her maid’, and have variously been considered to represent wedding preparations, funerary rites, or simply occurrences of everyday life. Perhaps these subjects related to the uses and functions of lekythoi amongst women and their toilette. Here, the two women stand on either side of a kalathos, or basket, and gesture toward each other. The figure to the left holds a distaff, an implement used for spinning wool. Therefore, one can surmise that wool is being collected in the basket between them.

The scene is bordered above by bands of stopt meander that face alternately left and right and are divided by saltire squares – a pattern known as ULFA, for ‘upper, lower, facing alternately’. This scheme was a tradition that originated from the workshop of the Berlin Painter and was favoured by many of his pupils. A band with a simple Greek key pattern borders below. Graceful palmettes and scrolling tendrils encompass the concave shoulders, with tongues at the base of the neck.

Exemplifying the great achievements of the Achilles Painter in the most prolific middle phase of his career, this lekythos ties together his grandiose artistic pursuits, by employing in the red-figured technique a subject normally reserved for his white-ground compositions.  The true epitome of the Classical vase painter, the Achilles Painter has taken the highly esteemed tradition of his great teacher with the utmost delicate skill, and has molded it with a commonplace subject-matter on to a utilitarian vessel, bringing magnificence into the everyday.