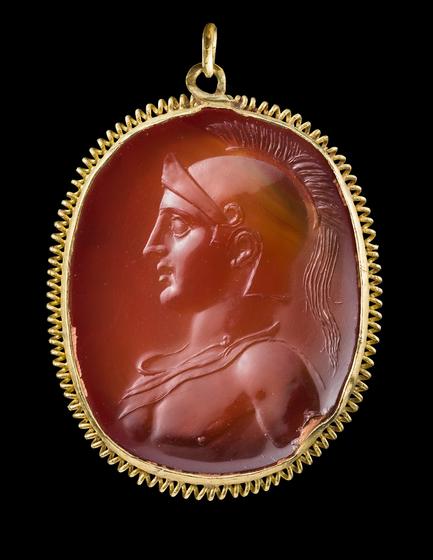 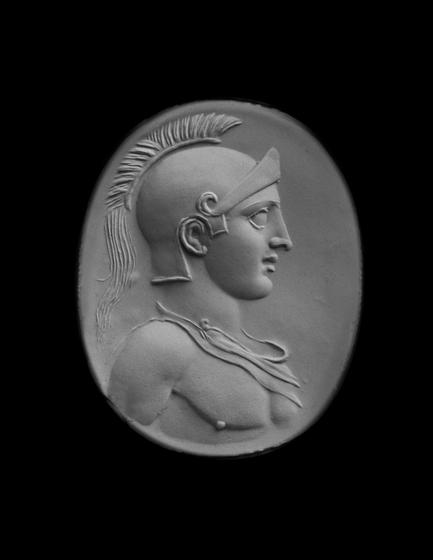 Few categories of ancient art can tell the story of ownership, connoisseurship and antiquarian collecting as well as the ancient gemstone. This marvelous hardstone, meticulously engraved with a bust of the God of War, is a resplendent and expressive example of that story. It has been set as a pendant in a mount edged in spiral twisted gold wire since the Renaissance, which was the start of its modern history, over four hundred years ago. The deep red of the carnelian stone is richly illuminated by the contrast with the gold mount, generating a glorious harmony that vibrantly illustrates the majestic subject.

The field of this oversized gem is almost entirely filled with a large-scale profile bust of Mars.  The iconography bursts with the god’s virility, as he is displayed bare-chested but for a diaphanous mantle draped over his right shoulder. He is armed in a protective crested helmet that conforms tightly to his head and neck, exposing his ears. The visor is raised at his brow. His profile visage echoes the regal masculinity of his form, with a strong nose and chin, and wide-open eye.

With a history of ownership, publication and exhibition far longer on paper than the scale of the gemstone itself, this powerful charm has befitted several celebrated collections. It is first documented in the seventeenth-century Arundel Collection. A large percentage of the Arundel gems were first collected during the fifteenth and sixteenth centuries by the Gonzaga Dukes of Mantua, as is quite possible for the present piece. The gold setting certainly suggests a Renaissance ownership. From Arundel, this intaglio and the collection as a whole eventually passed into the hands of the distinguished collection of George Spencer, the Fourth Duke of Marlborough at Blenheim Palace in Oxfordshire. The illustrious Marlborough Gems, over eight hundred in number, were sold as a single lot at auction by the Seventh Duke of Marlborough in 1875. This gem, along with several others, appeared at auction again in 1899, at which point they were further dispersed. Our Mars came back to auction a third time in 1909. Then, in the late 1930s, this intaglio was acquired by scholar-dealer-collector Giorgio Sangiorgi. Sangiorgi was a second-generation antiquarian and dealer of antiquities in Rome. His passion for engraved gems and ancient glass led his pursuit in amassing extraordinary private collections of his own.

Here the mighty military powers of Mars have been captured in tangible miniature. From its Augustan Period manufacture through to the early twenty-first century, this magnificent jewel has been the adornment of celebrated nobility. It will surely continue to pass on to its future owners the commanding grace of its subject and of its previous proprietors.