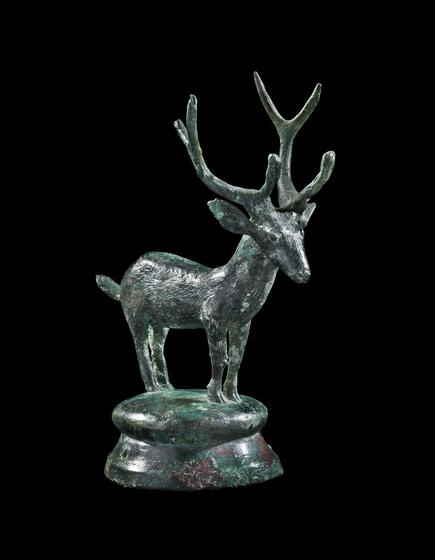 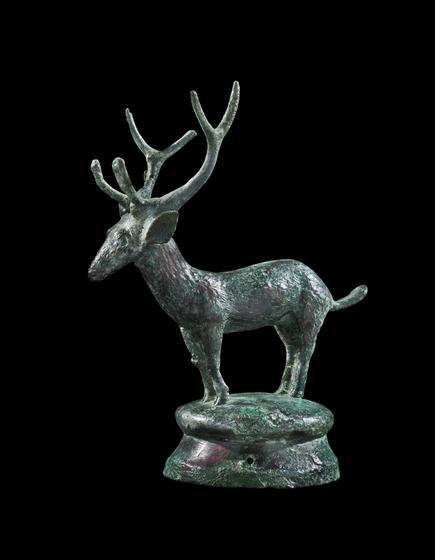 The Dian Kingdom comprised indigenous, non-Chinese agro-pastoral metalworking peoples centred around the Dian Lake plateau of central northern Yunnan province from the fourth century BC until the second century AD. The inhabitants of this southwestern province were recorded by the Western Han historian Sima Qian as ‘southern barbarians’, and, with no written tradition of its own, it is the Dian’s artistic legacy that has revealed such fascinating aspects of its culture and society. Population movements and cultural assimilation resulted in the fluid transmission of artistic and technical ideas. As a result, The Dian produced extraordinary bronzes depicting animals, human interaction, and composite images of animals in combat with each other, the lifelike quality of which is unparalleled in the region at this time. Eventually, the Dian were displaced and subsumed into the Chinese Han Dynasty.

This striking, naturalistic depiction of a stag standing atop a perforated domed cover is typical of Dian aristocratic art. The stag’s facial features are neatly incised, and the representation of its antlers and limbs are highly realistic. Its body is given an impression of texture through the use of simple incisions to indicate the animal’s short tufted fur. A similar example has been excavated from Jinning county, Yunnan, and this style is characteristic of the finds from richly furnished tombs on the eastern and southern shores of the Dian Lake. Realistic animal and human imagery reminiscent of the iconography of the steppe peoples indicates close relations among these different nomadic tribes.

It is possible that this cover is the lid of a cowrie container. Cowrie shells, which came from snails found in the Pacific and Indian Oceans, were used as currency throughout Asia and Africa, and elaborate bronze vessels were created for their storage. These cowrie containers are particularly fascinating, since they provide a visual record of Dian culture; often the lids depict people engaged in activities such as training horses, weaving, and tending livestock, as well as freestanding figures of sacred animals such as the stag, as in the present example, bulls, and tigers. Used both within the household and as grave goods, cowrie containers would have been commissioned by wealthy individuals to symbolize their status. Examples with stags and bulls are displayed in the Yunnan provincial museum.