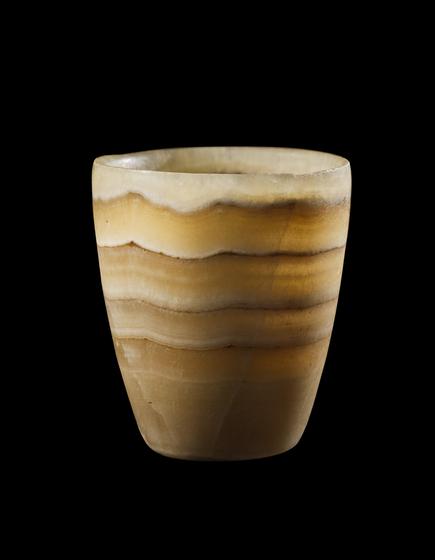 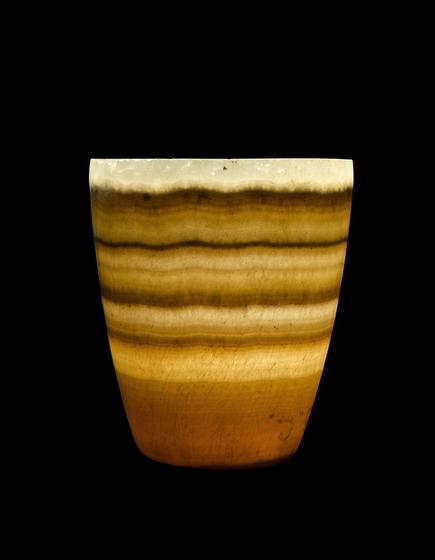 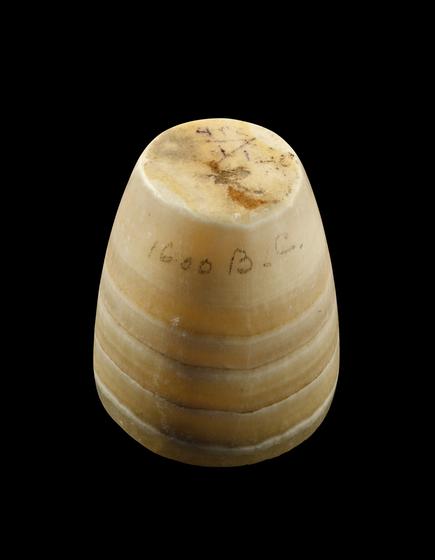 The ancient Egyptians developed the art of creating beautiful vessels from a wide variety of beautiful stones long before they transferred those techniques to the sculpting of stone statues. This particular vase dates to the First Dynasty, close to five thousand years ago. During the late Predynastic and Early Dynastic periods, stoneworkers developed new technologies to produce stone vessels; in addition to using abrasives, they employed drills, saws, and lathes, with which they were able to create exquisite designs. The significance of stone vases to the Egyptian cultural record, and the beauty ascribed to them even in antiquity, is testified by the fact that the counterweight drill employed in their creation was represented in hieroglyphs, and was used in the writing of the noun for ‘art’.

This example is carved of Egyptian calcite alabaster, a stone prized for its translucency, exquisite banding, and softness. Its creamy-white colouring also connoted purity and cleanliness, so that, when used in ritual contexts, the vessel remained uncontaminated and anything placed within it was thought to remain eternally unsullied. Here, the ancient craftsman has artfully exploited the inherent banding of the alabaster, ingeniously incorporating it into the design, so that the horizontal bands of geological sedimentary layers wrap around the vase’s circumference in a series of alternating coloured bands. The resulting composition is remarkably contemporary in feeling. The surface is highly-polished, creating a smooth and incredibly tactile form. This type of vessel was intended to hold unguents, ointments, and perfumes, both whilst the owner was alive and also in the tomb, so as to provide the individual with all the comforts and delights of life for eternity.