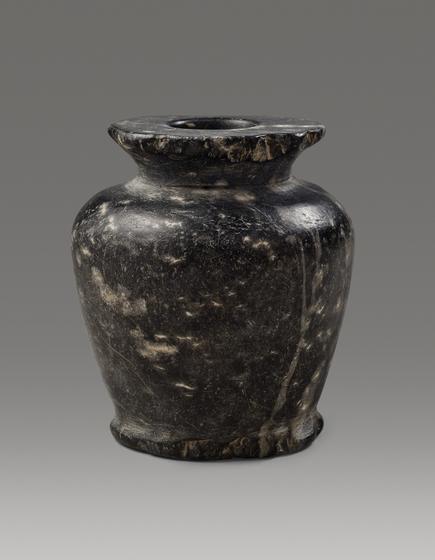 Cosmetic vessels were especially important personal effects foressential daily ointments and remedies, and a jar for storing kohl would be most useful when it could fit in the palm of one’s hand. The narrow cylindrical opening on this fine diorite example would have been ideal for a slender finger or an applicator – usually fashioned of wood, bronze or stone. Short, broad vessels with a flat bottom, such as the present example, became the standard form for kohl pots, and most were sealed with a tight lid to protect the precious contents within. Whilst the shape remained relatively consistent, kohl jars were fashioned from pottery, faience and a variety of stones, most especially softer stones such as calcite alabaster and anhydrite. More rarely, they were carved from harder stones, such as this diorite example, indicating that it would have been considered a luxury item and an indication of the owner’s prestige.

Special mention should be made of this object’s fascinating collecting history. It was purchased by Mr Edward Drummond Libbey, founder of the Toledo Musuem, in 1906, and was donated to the museum along with a collection of other Egyptian antiquities. The present piece is recorded in a catalogue of this collection, published in 1906.