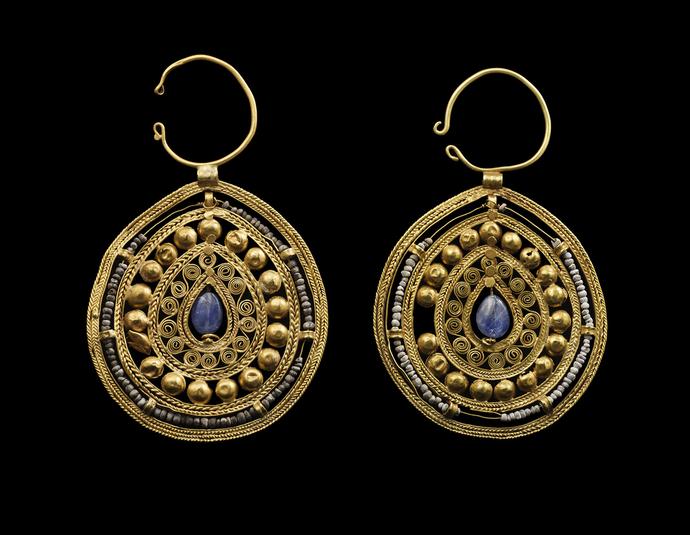 Pear-shaped earrings in openwork sheet gold are well known in the Early Byzantine world, around the sixth to seventh centuries AD, in the Eastern Mediterranean. Here, however, the elaborate nature and the concentric row of flattened spheres suggest a slightly later date. The rigid join between hoop and pendant is paralleled in some Byzantine and Medieval Islamic jewellery, but in this case might possibly indicate that the earrings were adapted from necklace pendants into earrings in antiquity and within a generation or so of their initial manufacture. The reuse and adaption of jewellery was common in the ancient world. Here the presence of round wire made by the early strip-twist technique suggests that these earrings cannot date much later than the eighth or ninth century, the period at which the technique of wire drawing became prevalent.

Each earring is exquisitely wrought, consisting of a tapered gold hoop, to the lower part of which is attached a rounded, pear-shaped pendant composed of concentric bands of twisted wires, pearls, flattened gold spheres and double spiral motifs. In the centre of each is a pale blue sapphire bead. In some places small gold disks made from flattened gold spheres decorate and reinforce the construction. There are slight differences in detail, for example in one place one earring uses twisted square wire while the other uses two circular- sections wires twisted together, which may suggest that two highly skilled goldsmiths were involved in their manufacture.

The pale blue beads are sapphires, the colour and pear shape of which indicate that they are almost certainly from Sri Lanka. Pale blue Sri Lankan sapphires became fairly well known in early Byzantine times, being traded from Sri Lanka to the Mediterranean via the sea route to the Red Sea and then up to what is now Jordan, or across to the Nile and via Alexandria. The trade to the Mediterranean largely died out after the rise of Islam in the seventh century, but existing stones were reused through the Medieval Period in Europe and it is likely that some Sri Lankan gems still reached the Islamic world, which was by then centered around Baghdad.