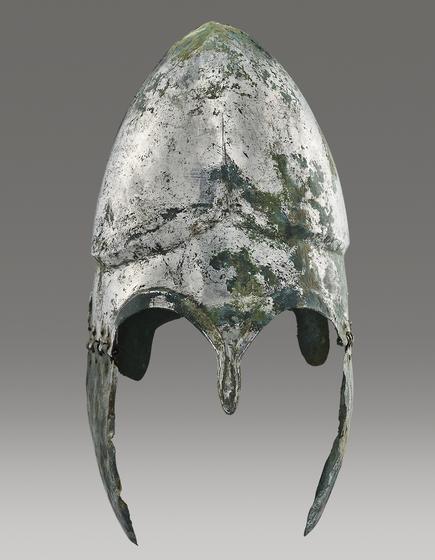 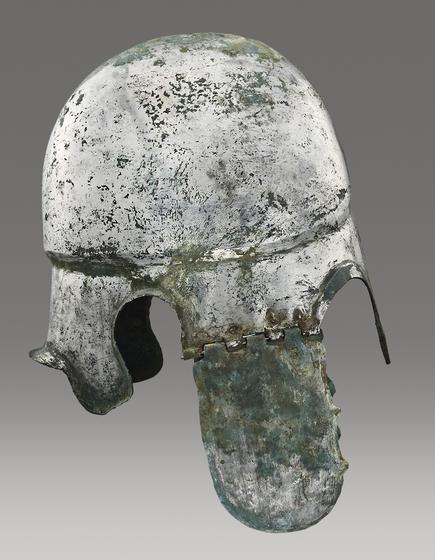 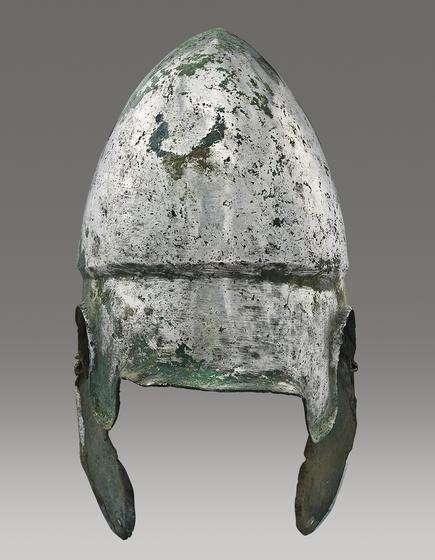 This superb Chalcidian helmet is astoundingly well preserved and is magnificent for its extensive retention of the original tinning. The surface shows, even now, in stunning splendour, as if the helmet has been forged of solid silver. The original cheek-guards have both been preserved, hinged at the sides, together with its nose-guard, fully completing the striking armour as it once intimidatingly protected a Greek soldier in the field. The design of the helmet is particularly sculptural, with a sharp horizontal carination that offsets the high dome, and a pronounced peak at the centre. The front of the visor elegantly displays raised stylized arching brows that merge as they dip into the nose-guard. The sides are gracefully contoured around the ear apertures. Its superb quality indicates that it would have been the pride of a soldier of high military rank and great prestige.

Chalcidian helmets derive their name from the city of Chalcis on the island of Euboea, although there is no evidence that the form actually originated there. The type was in widespread use across the entire Greek world throughout the Classical Period, including into Northern Thrace and beyond the Danube. This helmet type remained in use well into the fourth century BC, especially on the Italian peninsula, where it is widely found depicted on local pottery. The present helmet epitomizes the archetypal Chalcidian form, which can be seen on Attic pottery as early as the sixth century BC. The defining feature of the helmet type is the aperture for the ears, which was a revolutionary innovation, as all other contemporary helmet forms were consistent in their audial impairment.

The basic form of the Chalcidian helmet evolved from the Corinthian type, incorporating many of the classic features of the Corinthian, especially the protective nose-guard, while further developing the design. In this reconfigured scheme, in order to accommodate the contouring around the ears, the cheek-guards became offset, allowing for added flexibility, and eventually hinging, as here. By comparison with the Corinthian helmet type, the Chalcidian helmet provided a more open alternative to the confining, wrap-around design, providing a better field of vision, enhanced ventilation and enabled hearing – all of which heightened communication on the battlefield, thereby revolutionizing warfare for the Greek hoplite.

While Chalcidian armour was most certainly widely employed in warfare, many helmets were also preserved for votive purposes, as offerings in temples, perhaps in thanks for success on the battlefield, or invoking the gods for protection prior to battle. The superlative artistic quality of this brilliant example may suggest that it could have borne such a votive function, as it would clearly have been considered worthy of the gods. Perhaps it was presented as an offering after the retirement of the valiant warrior who had, indeed, proudly sported it into war. Equally, it is possible that a helmet of this significance would have accompanied the veteran into his tomb, protecting and celebrating him in this life and for all time.

There is a helmet of similar form and achievement in the collection of the Walters Art Museum in Baltimore, although its patina is a brilliant green, in contrast to the mirror-like quality of the tinning on the present example.