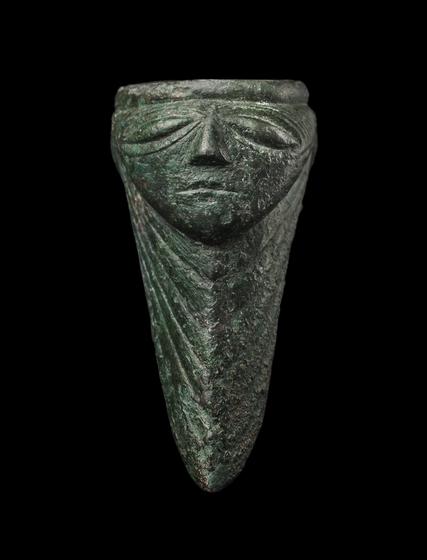 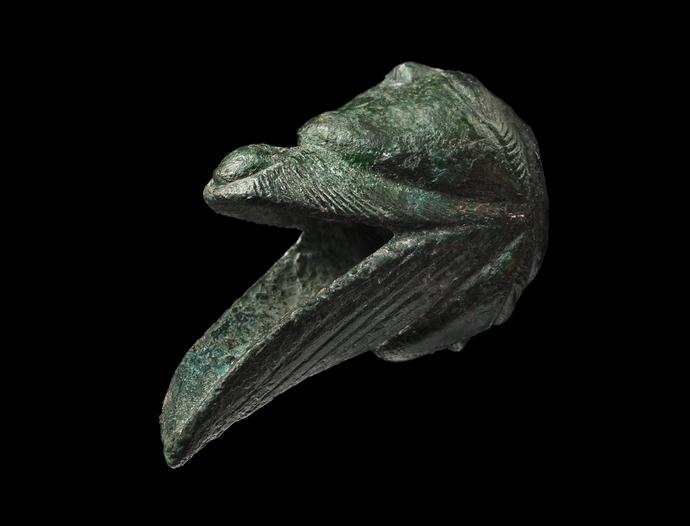 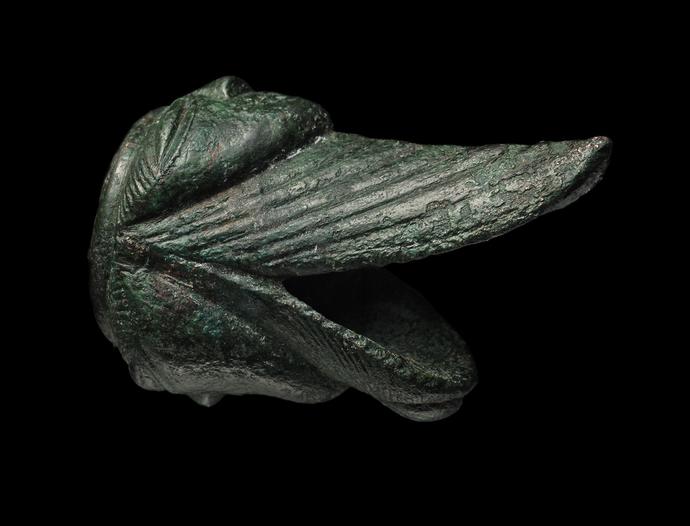 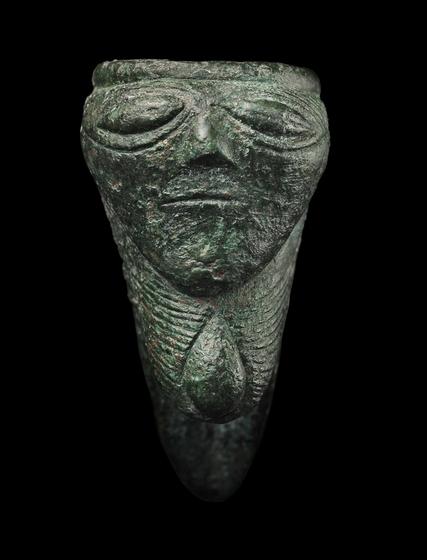 During the sixth and fifth centuries BC, there was extensive communication between the Mediterranean world and the region stretching from eastern France, through southern Germany, to Switzerland, facilitating the diffusion of artistic styles and traditions. As a result, during the fifth century, a distinctive style of ‘Celtic art’ developed, drawing on ideas and motifs from the classical world from imported Mediterranean objects such as bronze vessels. These designs were adapted and fused with local styles to create innovative and unique Celtic compositions, with an emphasis on abstraction, ambiguity and use of linear form.

This spout probably originally once adorned an elaborate bronze vessel derived from Etruscan designs. Such vessels were used for mixing wine or other alcoholic beverages and were normally buried with their owner or handed down as heirlooms, as signs of status. The spout features two highly stylized human heads on either side, with large, lentoid eyes, a prominent nose, and a thin, slightly downturned mouth, giving an impression of solemnity and sternness. Such designs were inspired by the Etruscan bearded Silen, and by a clean-shaven variant with straight hair ordered into a fringe, however, comparison with these demonstrates clearly the originality of Celtic designs.

Human heads, and in particular, stylized heads, are a recurring feature of Celtic art. Some early scholars argued for a cult of the head based around head-hunting, but this theory has now been dismissed. Instead, it is thought that they carried a variety of meanings, from symbols of warrior prowess to the demarcation of a sacred space. They were also often used as symbols of fertility and prosperity, reminders of the ancestors who ensured the survival of the culture through the defeat of enemies. The imagery of Celtic art, however, in many respects still remains a great mystery. The repetition of certain motifs, such as human faces, could relate to particular myths or rituals that are now lost to us, rendering an enigmatic object such as this all the more intriguing today.

For examples of anthropomorphic faces on bronze vessels, see a pair of Basse-Yutz flagons at the British Museum, London (inv.1929,0511.1-2, 400-360 BC) and two bronze jugs from the Kleinaspergle burial at the Würtembergisches Landesmuseum, Stuttgart (inv. 8723, 450-400 BC). A bronze disc from a horse harness in the National Museum, Prague (inv. H1-85028, 450-400 BC) features similar staring heads with large, lentoid eyes and sombre expressions, as does a sandstone pillar known as the Pfalzfeld pillar (Rheinisches Landesmuseum, Bonn, 450-400 BC). Decorative heads also appear on later Celtic bronze vessels, for example, a bucket fitting in the form of a human head in the British Museum (inv. 1911,1208.5, 50-25 BC) and a handle attachment from a bucket in the form of a stylized face, also in the British Museum (inv. 1886,1112.1, 75-25 BC).