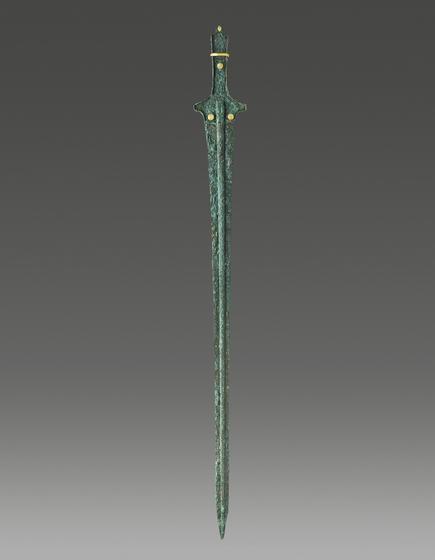 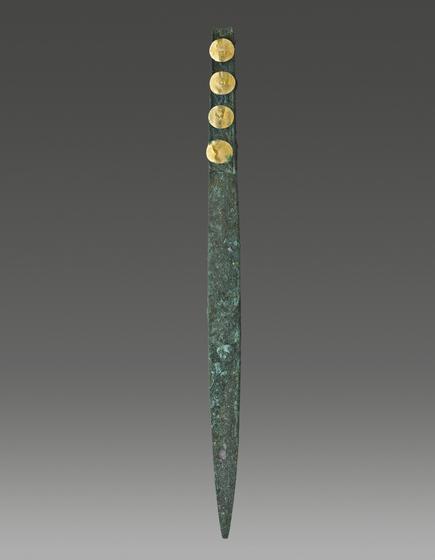 The daggers and early swords of the Aegean Bronze Age represent some of the most striking artefacts of the period in terms of their opulence, craftsmanship and display of technical virtuosity. Whilst some were used solely for ceremonial use, many were functional instruments of war, attested by the clear developments in form, according to fighting preferences and practices. The short sword, which developed from the dagger, is one of the most interesting innovations of the Bronze Age, often signifying social status in societies in which hierarchy and one-on-one combat were primary concerns. The present dagger and short sword probably originate from Crete, in the locality of the great palaces at Knossos, or from Mycenae. The Minoan and Mycenaean civilisations were renowned for their wealth, richness of culture, technical sophistication, and strong influence across the Greek world for centuries to come. These are the weapons of the fabled heroes of Troy, the great treasures of powerful kings like Agamemnon, who ruled over the kingdom of Mycenae.

Tombs containing daggers and short swords represent only a few of the total number known from the Late Bronze Age, suggesting that these thrusting weapons were owned by the richest, highest-ranking members of society. It is difficult to distinguish with certainty what is classified as a ‘short sword’ or ‘dagger’, but it is generally agreed that anything under 45 cm in length constitutes a dagger. The evolutionary process of these weapons has been classified by Sandars, who has catalogued the various types into eight main groups identified by the letters A to H.

This short sword belongs to the group Di, also known as ‘cross swords’ due to the configuration of the handle and cross-guard. They are characterised by their rounded lobe shoulder, thin blade with a well-raised rounded central rib, and flanged shoulders and tang. As here, they usually have two rivets in the shoulders and one (or three) in the tang. These swords are attested in Crete, on the Greek mainland, and on some Aegean islands such as Kos and Rhodes, and it is thought that their centre of production was at Knossos. On average, they measure about 60 cm. The type was invented and in use at the same time as its predecessor, the Ci type, and the two share many qualities. Both feature an elongated tang, which would have helped to remedy the weakness of the handle found in earlier sword types, and both were suitable for thrusting and cutting. The Di type, however, was created for a ‘hammer’ grip, which presents the edge of the blade forward, designed for a cutting action. The Ci type, by contrast, used a ‘sabre’ grip, allowing the forefinger to wrap around the lobed guard, creating a fighting action more reminiscent of fencing. That these two sword types were in use contemporaneously suggests the existence and encouragement of multifaceted specialised skills in warfare. They also attest to an independent, one-on-one style of combat, that was suited to the elitist, hierarchical nature of Minoan and Mycenaean society during this period. A particularly ornate type Ci sword was found in tomb 46 in Kydonia, Crete, measuring 83 cm long. Like ours, it features the gold rivets and rind on the grip, but also retains an ivory pommel, giving some indication of what our sword may originally have looked like. Type D swords have also been found at the palace of Knossos, Crete, also with gold rivets, and from Mycenae, with gold coverings on the handles (circa 1350 BC).

The smaller of these two weapons would likely have been used as a dagger, but it may also have functioned as a general-purpose cutting implement. In the shaft graves of Mycenae, several examples of these weapons have been found, for example a single cutting edge knife 33 cm in length in the tomb of the warrior Dendra (circa 1450-1400 BC). Its inclusion as a grave offering indicates that it was considered among the significant effects within the paraphernalia of a distinguished warrior. Just as the present example, four rivets are inserted into its tang, to hold in place a wooden covering. Similar knives are also attested in several Achaean settlements, for example a 27 cm long example from tomb number 529:25 in Mycenae (circa 1400 BC); and a narrow-bladed bronze dagger from Kydonia (1300 BC), as well as one from Sanatorium, Crete (1350-1300 BC).

The celebrated ostentation of hilt décor, such as on these examples, does not undermine the utility of these weapons – rather, it indicates the great prominence of their original owners. This sword and dagger both impressively retain their original gold rivets. These glittering spheres had both a decorative and practical function, since they held in place the ornate hand-grip which would have been made of wood or ivory, and perhaps was once overlaid in gold. The hand-grip was sometimes also topped by a knob made of ivory, amber or gold. The preservation of these rivets allows us to imagine something of the prestige these weapons once wielded. Indeed, Homer refers to swords with both gold and silver rivets in the Iliad, the most frequent epithets of the sword being arguroelon – ‘silver-studded’. In Book XI, we are told how Agamemnon assumes his armour: ‘But the son of Atreus shouted aloud and bade the Argives array them for battle, and himself amid them put on the gleaming bronze…about his shoulders he flung his sword, whereon gleamed studs of gold’. The significance of the present sword and dagger, then, lies in the way they combine aesthetic beauty with function and status, and in the way they offer a glimpse into the innovations of contemporary warfare. Above all, their attraction inheres in the fact that they represent the agents of war of the revered heroes of the epic cycle, who, through the flourish of such a sword, lived, were slain, and achieved eternal glory.