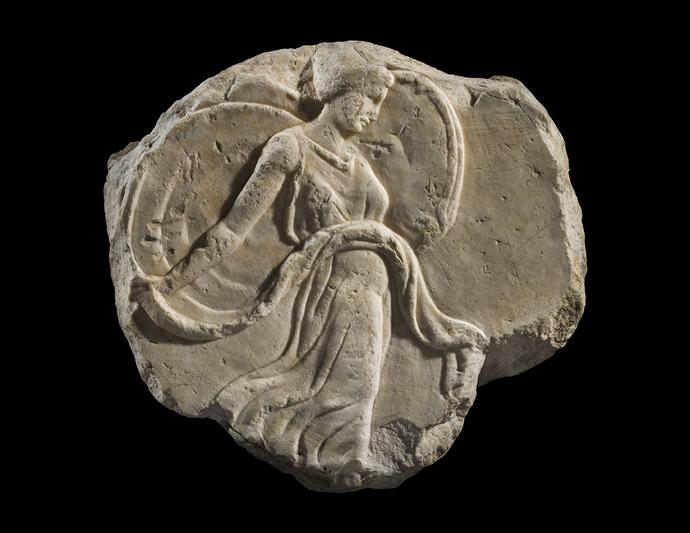 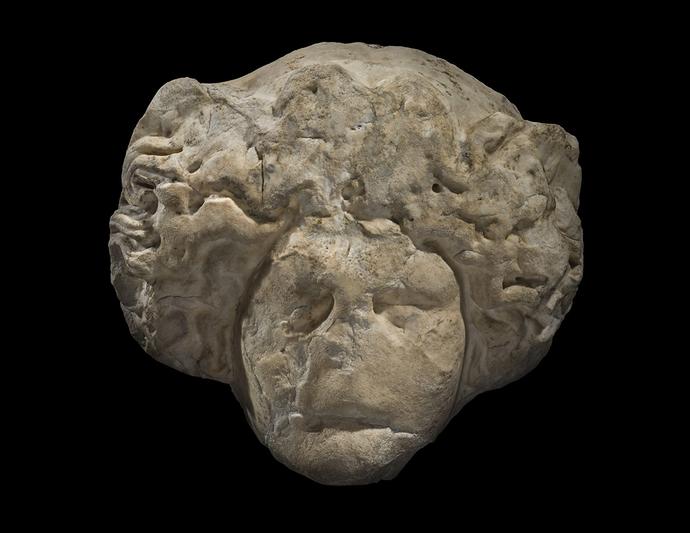 In the first century, the most fashion-forward of Rome’s elite were hanging finely-carved decorative marble disks in the extravagant sculptural programmes of their lavish villa gardens.  These disks were called oscilla (oscillum, sing.), the diminutive of the Latin word os (face), as the type derived in part from decorative hanging theatre masks.  These disks were suspended from the architraves or ceilings of colonnaded porticoes, and they would swing or turn in the wind, hence lending itself eventually to the English term “oscillate”, to swing back and forth”.

The present example exhibits the most common form, the disk (the others were rectangular and the form of a pelta-shield).  It is sculpted with two divergent, yet poignant of the most popular oscillum motifs.  On one side, carved in fine low relief, is a maenad moving to the right.  Her diaphanous drapery sensually clinging to her womanly form, while her mantle billows behind like a sail caught in the wind.  In her left hand she holds a large tympanum.  Such Dionysiac iconography is typical of Roman oscilla, as it is thought that the tradition relies, in part, on the revelry associated with the cult of Dionysos.  The opposite side, in contrast, depicts a facing winged Gorgoneion in higher relief.  The Gorgoneion was a typical totem imparting apotropaic potencies.

The decorative scheme so richly carved on this oscillum may simply be decorative, chosen by its ancient Roman patron to complement the other sculptures presented in their garden. Even so, it would have informed viewers and guests of the messaging priorities of the estate.  The presence of the dancing maenad was an homage to music, dancing, and general merriment associated with wine – informing that this home was a place where such behaviour was tolerated and even celebrated.  Furthermore, the billowing of the maenad’s drapery was a playful reference to the blowing wind that would be turning and swinging this tondo as it hung in place.

The apotropaic nature of the Gorgon face is, in itself, a testimonial of the ancient tradition of hanging votives as offerings to the gods for protection.  Gorgoneia are ubiquitous in Greek art as early as the eighth century.  Even the goddess Athena was depicted wearing a protective Gorgoneion on her aegis in her cult statue.  The presence of the Gorgon on this oscillum would have been unquestionably understood as averting evil influences in the home.

The preserved gardens of Pompeii are an informative backdrop for understanding the impact of oscilla in Roman villas.  In the earliest reconstructions of the House of the Gilded cupids, an oscillum or theatre mask was suspended from the ceiling between almost every column and pilaster, with a large disk oscillum, like the present example, in the central aedicula.

The present example poignantly illustrates the impact of a finely sculpted oscillum in the sculptural programme of a Roman stately home.  With the decorative, mythological, ritual and apotropaic functions all so thoughtfully interwoven, the presence of this hanging disk would have conveyed multitudinous connotations; not the least of which was how in vogue were the owners of the magnificent garden it adorned.