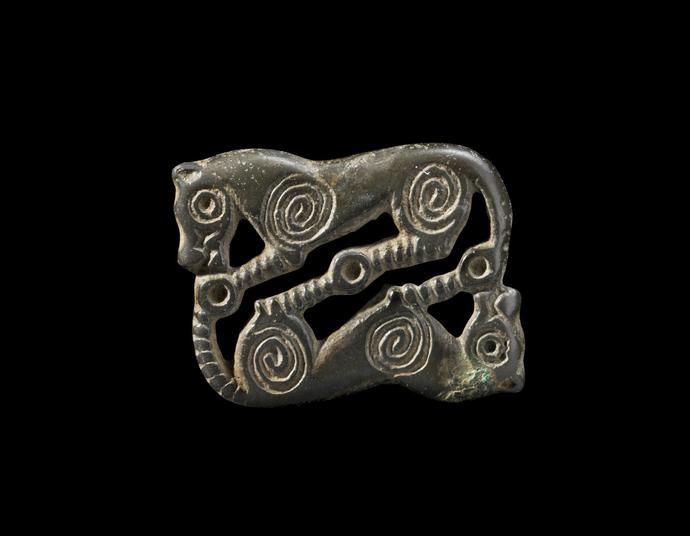 Bronze and precious metal appliques and plaques represent some of the most distinctive objects associated with the Eurasian Steppe peoples. Sometimes functional objects, they were also prominent pieces of regalia adorned with visual symbols that could identify the owner’s tribe, rank and status.

The present plaque masterfully combines smooth contours with geometric motifs to create an intricate work of art that exudes a symmetrical harmony. It depicts two crouching felines, perhaps panthers or tigers, shown top-to-tail, their paws and tails joined, creating a composition of seamless continuity. Their features are stylized, with the limbs, tails, and musculature rendered as a series of incised spirals and stripes, which resemble zig-zags. Concentric circles and indented areas indicate the ears, eyes, and jaws. The plaque has a vertical loop on the reverse for attachment to a belt or other garment. Two related examples were excavated in Inner Mongolia (Duan Shuan 1995, pl. 131), and a similar feline is also in the Sackler collection (Northeastern China, eighth to sixth centuries BC, inv. no. V-3295).

Animal imagery central in the art of the eastern steppes is reflective of the pastoral communities’ close relationship with the natural world. Furthermore, it was thought that wearing images of fearsome beasts would imbue the wearer with such qualities of power and authority.

The example from the Sackler collection is published in E.C. Bunker, T.S. Kawami, K.M Linduff, and W. En, Ancient Bronzes of the Eastern Eurasian Steppes from the Arthur M. Sackler Collections (New York, 1997), no. 79.