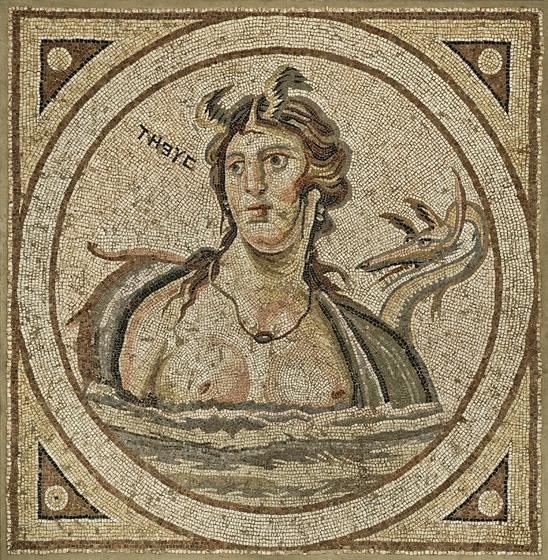 This exceptional polychrome floor mosaic depicts the sea goddess Tethys. In Greco-Roman mythology, Tethys was the daughter of Uranus, the god and personification of the sky, and Gaia, the goddess and personification of Earth. This splendid representation portrays the goddess in her canonical form, nude with a draped shoulder robe, long wet locks, and two lobster claws issuing from the top of her head. At her left shoulder, a marine serpent known as a ketos recoils; the serpentine body of the creature continues along the right shoulder of the goddess and into the sea. The subject is identified by the Greek inscription, THθYC (TETHYS), and is submerged in irregular horizontal bands of grey and green tesserae that skillfully convey the motion of the sea.

From a technical perspective, the tesserae or cubes are relatively large, but laid with a high level of technical capability and the achieved result is a floor of a fine aesthetic quality. Pictorially, the challenge – as in painting – was to produce a three-dimensional illusion on a two-dimensional surface, and this was far more difficult to accomplish in mosaic art than paintings, since mosaicists were constrained by the size of the cubes with which they were obliged to work. These tended to be small in the Hellenistic period (opus vermiculatum – ‘worm-like work’) and progressively larger in the centuries that followed (opus tessellutum – tessallated work). The execution of this floor is admirable from the point of view that a sense of three-dimensionality has been produced by framing the main subject with a thin contour of cubes, and also superimposing the deity behind the sea. Thus, the subject matter seems to project and is in this way framed like a picture in the traditional Hellenistic mosaic emblema.

Technically, the shift from higher to lower densities that culminated in the Late Antique period, corresponded with a stylistic change that was characterized by abstraction rather than realism, and a component of this was linearity, which became, generally speaking, more exaggerated through the course of the fourth, fifth, sixth, and seventh centuries AD. The Tethys floor mosaic expresses clear abstract and linear artistic traits which are especially a component of the drapery of the goddess, her coiffure, the circularization of the breasts, and the rendering of the ketos. In this floor, however, the representations are given a sense of artistic fluidity in the execution of linearity itself, and the serpentine freedom of the ketos expresses this special artistic touch in particular. The abstraction is also achieved by the technical mastery of the shading used on the breasts of Tethys, the remaining parts of her body, and face.

The density of the cubes and the nature of the abstraction as defined in the Tethys floor indicate that it dates to around the mid fourth ceutury AD. The mosaic finds a number of parallels among the eastern provinces of the Roman Empire. Examples include Tethys in a larger marine composition from the House of the Boat of Psyches, Antioch (modern Antakya, Hatay Province, Turkey), dating to the third century AD, presently displayed in the Baltimore Museum of Art (BMA 1937.118); two other large third-century marine compositions from Antioch, though less well preserved, respectively from the Yakto Complex and a villa from nearby Seleucia Pieria (this time Tethys holds a rudder), displayed in the Hatay Archaeological Museum, Antakya; also from the third century AD, from a location near the House of the Sun Dial, Antioch, is the upper bust of Tethys with lobster claws and wet hair locks, displayed in the Memorial Art Gallery of the University of Rochester, New York State (42.2). The last floor that should be mentioned from Antioch depicts the upper bust of Tethys with a rudder surrounded by several marine creatures, though apparently not the Ketos, dating to the fourth century AD, displayed in Morgan Hall in the Harvard Business School. Akin to the mosaic under review, it is inscribed THθYC (TETHYS) in Greek.

It is clear from the frequency of parallels that mosaics featuring Tethys were a popular choice of subject matter in Antioch, where they were most likely used to adorn the luxurious dining rooms or bathing complexes of wealthy citizens. This also extends to the broader region. For instance, some 90km to the east of Antioch, the Gazientep Museum (in Gazientep Province, Turkey), displays a fine floor mosaic from ancient Zeugma (modern Belkis) from the House of Poseidon, also dated to the third century AD. In this case, Oceanus and Tethys are depicted beneath the chariot of Poseidon, the goddess appearing with the features that are synonymous, notably the lobster claws and the Ketos. By contrast, contemporary North African mosaics featuring marine scenes tend to depict Oceanus, Neptune, and Nereids. This indicates that Roman patrons in opulent villas in the region of Antioch had a preference for Oceanus and Tethys rather than those popular in North Africa, and this suggests two distinct mythological traditions.

The high quality of the technique and style of the Tethys floor under examination indicates a workshop, school, or ‘artistic circle’ capable of producing mosaic pavements of the highest standard for this era by orchestrating the fine balance of producing a virtuoso fluidity with relatively dense cubes. This indicates a metropolitan centre of production in Antioch or its broader region that could cater for the needs of villa patrons who demanded floor mosaics of the most ostentatious calibre.