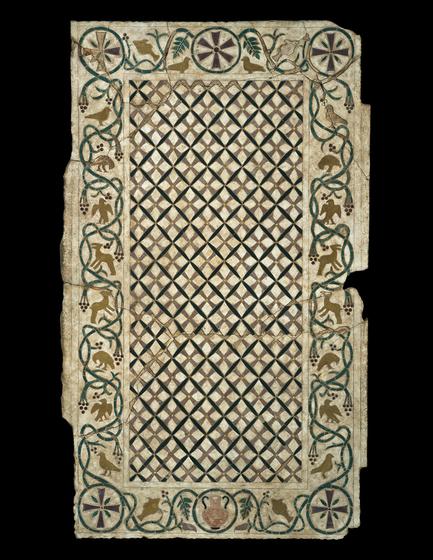 This exquisite object is a rare example of a marble panel inlaid with non-representational motifs in stone, glass and gold-mosaic tesserae in the area of its field and is framed by an ‘inhabited vine scroll’ on each long side that is populated with animals, birds and fishes. Each corner medallion contains a cross with four leaves, the medallion in the centre of the top short side depicts a christogram: a merging of the first two letters of Christ’s name, X (chi) and Ρ (rho), alluding to Jesus Christ or Christianity more generally. The medallion in the bottom short side shows a kantharos for wine. The vines that form the decoration of each short side do not enclose their subject matter.

It is possible that this magnificent artistic work was one of a series of wall panels, but it is more likely that it adorned a floor and abutted with similar elements. The rectangular composition and decoration of this panel is prefigured and has similarities with a number of Early Byzantine in the broader region of the Levant that date from the fifth through the sixth centuries AD. Of particular relevance are the ‘inhabited scroll’ motifs that comprise the borders in these floors. These contained similar motifs and are generally thought to be symbolical of the New Testament – the vine relating to Christ as The True Vine, the animate decoration having a range of meanings appropriate to the Christian realm. ‘Inhabited scroll’ borders are rare in private buildings, with only two known exceptions, and for this reason the marble panel almost certainly comes from a chapel or a church, probably the latter.

The panel in question transcends the quality of the mosaic floors mentioned, which were cut predominantly from limestone tesserae. As such, the material employed is more reminiscent of high prestige opus sectile, a technique especially common in the Roman period but rare in the Byzantine era. Thus the panel almost certainly formed an ostentatious component of an ecclesiastical building of considerable status, underscored by wealthy benefactors. An inlaid marble floor panel with geometric designs is displayed in Istanbul Archaeological Museum.