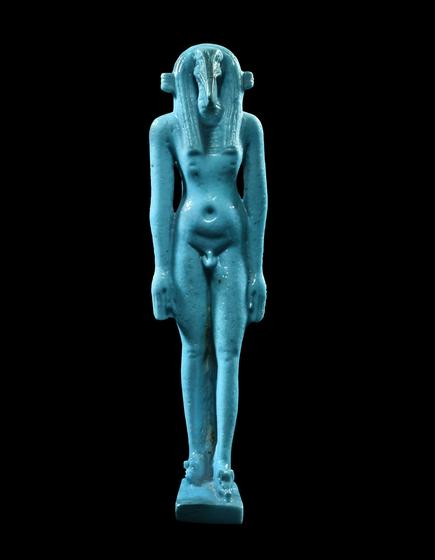 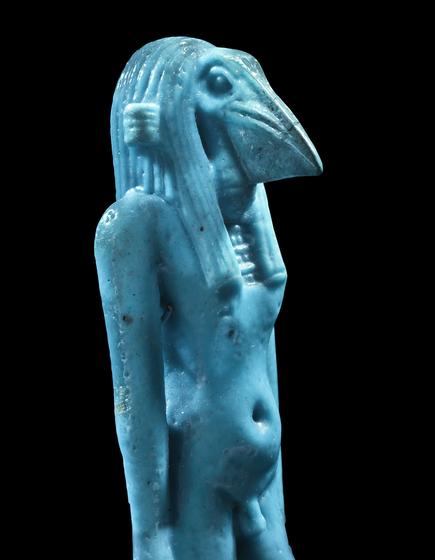 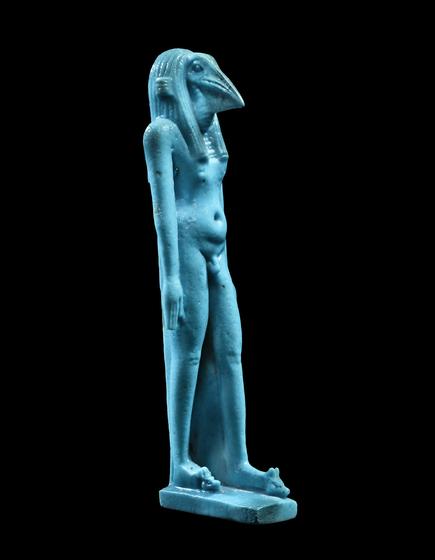 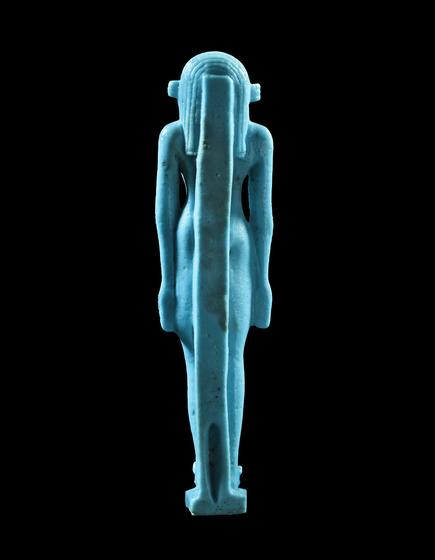 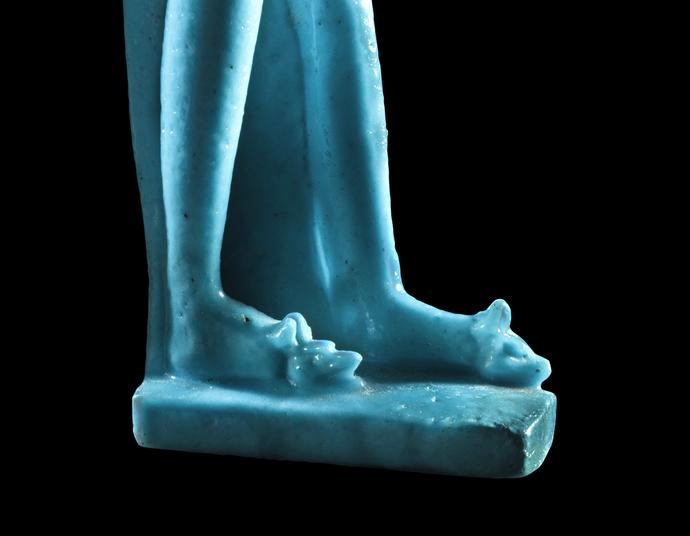 The god of wisdom and writing, Thoth was a multifaceted deity whose realm encompassed the moon and its stages, measurements, events, and even magic. Thoth was also believed to be a regulator and an arbitrator between good and evil, and he played a prominent role in funerary mythology, weighing the heart during final judgement. As the inventor of writing, Thoth became the patron god of scribes. He was depicted in several guises: sometimes shown as a baboon, whose nocturnal habits came to be associated with the deity’s lunar duties; and as an ibis, or an ibis-headed man, as here. It has been suggested that his manifestation as an ibis can be attributed to the shape of the bird’s beak and curvature of its neck, both of which resemble the waning crescent moon.

Here, we see Thoth as an ibis-headed man in full nudity, with a corpulent torso and fleshy ‘donut’ abdomen. Fashioned in a glazed composition of a vivid turquoise blue hue, the regal god stands striding forward with his left leg on a low integral rectangular plinth. His arms are held stiffly at his sides with the fingers pointed down. He wears a striated tripartite head-cloth with a cylindrical loop positioned at each side, perforated for suspension likely from a cord, indicating its use as an amulet to be worn or tethered. His most remarkable aspect is the jackal-headed slippers in which he is shod. These likely represent the god Wepwawet, who was revered as a scout who would protect and safeguard one’s journey. Positioned prominently on Thoth’s feet, Wepwawet would emblematically maintain each and every step the Ibis-headed god would take.

Thoth’s main precinct was located in Khmun, later known as Hermopolis, a prominent urban centre located on the border between of Upper and Lower Egypt, second only in scale and opulence to the great Egyptian centre of Thebes. Hermopolis gained in status and magnitude during the Ptolemiac period. The Hellenized name of the city was indicative of Thoth’s association with the Greek god Hermes, who shared many attributes and aspects, including his role as secretary or messenger of the gods. In the iconography here depicted, Thoth is recognized as the Creator God of Hermopolis.

An amulet of this calibre would communicate the many dimensions of Thoth’s aspects in a manner worthy of the god’s great distinction, especially during the early Hellenistic age, when his deeply Egyptian attributes were so magnificently intertwined with the rising values of humanism – thus emphasizing his human form. The exceptional quality of this amulet, with its fine detailing and luminous glaze, transmits the magnitude of reverence this deity was afforded.