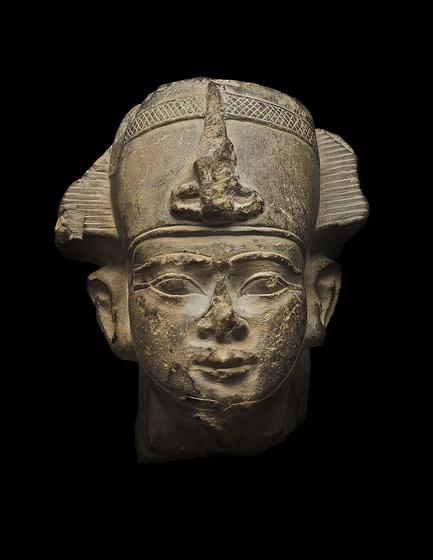 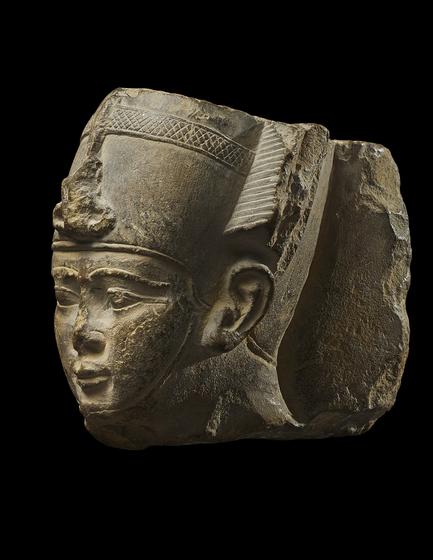 Osiris was one of the most important and revered gods in the Egyptian pantheon. As the god of the Afterlife and renewal, he was crucial to the Egyptians’ fundamental belief in the life after death and immortality, helping to secure safe and prosperous transition to this eternal state of being. He is sometimes referred to as the son of Ra, the sun god, and father of the patron falcon-headed god Horus. In hieroglyphs, Osiris is often depicted with green skin, evocative of his role in the afterlife; or with brown skin, indicating an association also with fertility, in this case, the mud of the Nile, whose seasonal flood was the most important natural event in ancient Egypt. Osiris became one of the most iconic figures in Egyptian art; in accordance with his importance, images of the god appeared in a variety of media and could be found in a range of contexts. Bronze and stone statues, such as the present, were probably reserved for sacred spaces, such as tombs or temples.

The god can be identified by his distinctive iconography. Here, he wears the atef crown, symbol of his role as ruler of the Underworld, which combines the Hedjet, the crown of Upper Egypt, with two ostrich feathers on either side, representative of truth, justice and balance. A long undulating uraeus (cobra), sign of divine authority, adorns the front of the crown, and the god would have worn a long false beard, now lost. This head would most likely have belonged to a full statue of the god, who would have been depicted mummiform, his body tightly wrapped in a shroud, and in his crossed arms he would have held the crook and flail, symbols of kingship and fertility respectively. The artist responsible for this work has paid considerable attention to detail; the feathers on either side of the crown are finely striated, to give the impression of the texture of a feather, and a carefully hatched band encircles the crown above the uraeus. The details of the face are also exquisite. The god exhibits a serene and regal countenance, and particular attention has been paid to his eyes, which are large and almond-shaped, with prominent extended eyelines and modeled brows. The statue would have originally been painted, and it is possible to discern the pupils of the eyes rendered in a dark colour, which imbues the god with a lifelike quality and depth of character.

The concept of Osiris as a royal god became increasingly popular during the course of the first millennium BC, in the lead up to the Ptolemaic period, which saw the rule of Greek kings over Egypt. There was a growing emphasis to represent the god not just as ruler of the underworld, but also as ruler of the living, and popular cults arose, in which the god was addressed by an array of epithets, including ‘the saviour’, ‘the one who rescues the miserable’, and ‘the Lord of the Living’. Adoration of Osiris led to the introduction in Ptolemaic times of the Greco-Egyptian syncretic god Serapis, derived from Osiris and Apis, who represented abundance and resurrection, and enjoyed popular veneration well into the Roman period.

Statutes of Osiris are more commonly known in bronze. Whilst depictions of the god in relief on limestone stelae are known, stone examples in the round are much rarer. A limestone head of the god belongs to the National Museum of Ireland, Dublin (Late Period, inv. 1892.757), although it is far less fine than the present work. A seated statue of the god in steatite is displayed at the Art Institute of Chicago (Late Period, inv. 1910.244).