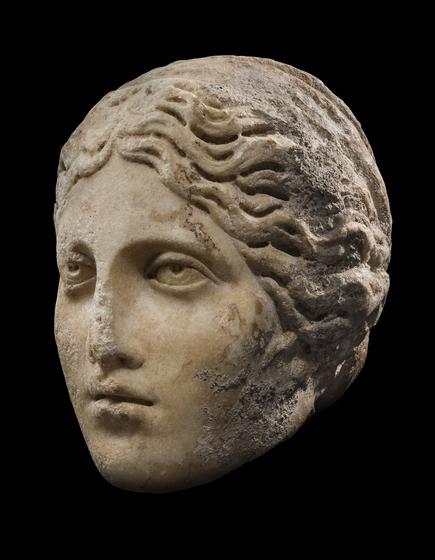 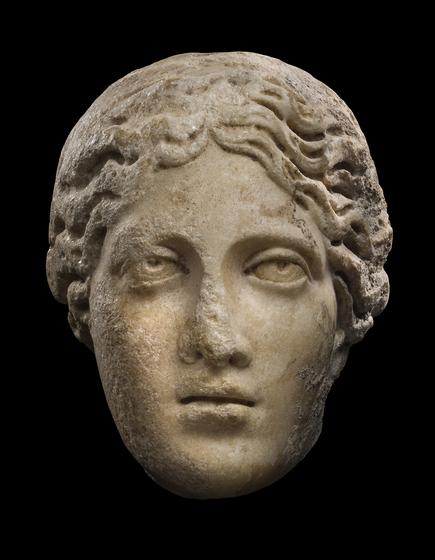 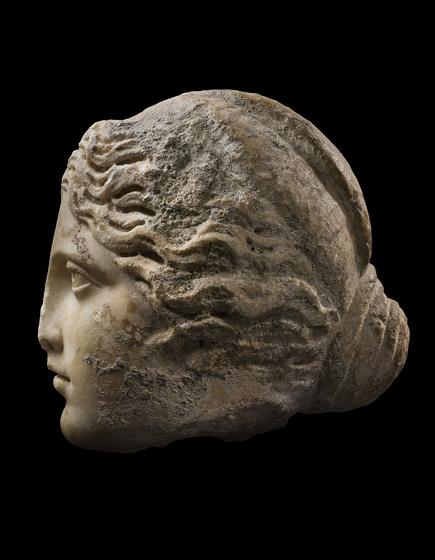 This enthralling marble head emanates all the hallmarks of third century female representations. While her features exhibit the idealism of deities and their retinue, the overall character retains elements of the realism so present in portraiture of the period. The soft curve of her brows contrasts poignantly with the tired heaviness of her dreamy, luminous eyes. Her thick bow lips echo those of the empress Julia Domna, whose late second century style was the primary model for the next several generations of Roman imperial portraiture. This youthful female wears the customary hairstyle of Greek goddesses, with thick wavy locks parted at the center and cascading in graduated thickness toward her ears. Yet, her skyward gaze is steeped in humanness – bulging, leaden, and communicative.

The scale of this head, in combination with the remains of a strut to the chignon and the seemingly unfinished aspect of her proper right side, indicates that it may have originally formed part of a sculpture in high relief. During this period, exceptionally large sarcophagi often displayed large-scale figures along their length. Such can be seen on the famous Sarcophagus of the Emperor Balbinus from AD 238, which displays scenes of the emperor and empress during their lives together. Similarities can also be seen between the present head and a sarcophagus fragment now in the Getty Villa, which depicts the Greek muses, inspirational goddesses of literature, science and the arts, standing along the front panel (inv. no. 72.AA.90). Now removed from its narrative, this mysterious visage continues to entice the viewer in her stoic silence.