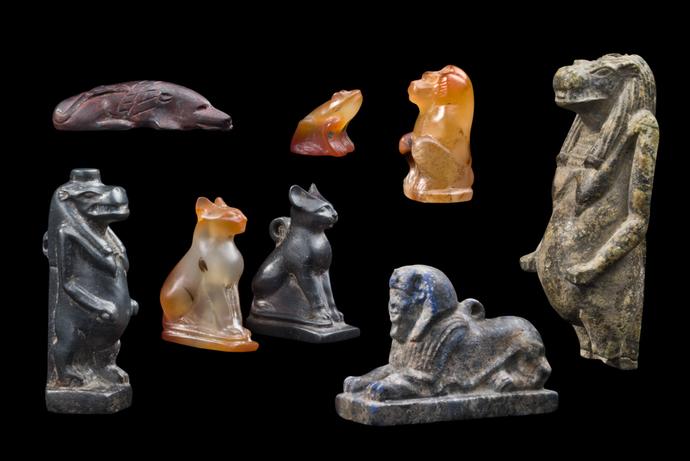 From as early as Pre-Dynastic times, ancient Egyptian men and women wore amulets or charms in a variety of forms, often in the shape of animals or divine beings. These amulets were thought to carry special, even magical, properties, offering the wearer protection and salvation. Usually, they were pierced for suspension from a cord, likely hung around the owner’s neck or fastened among their personal effects; as such, they were inherently intimate objects. After death, the amulet would be placed in the tomb as part of the owner’s funerary equipment in order to ensure continued protection for the spirit in the afterlife.

From the New Kingdom onwards, amulets of deities in animal or human form appeared with greater diversity. This charming group, seven of which date from the New Kingdom to Late Dynastic Period, attest to the variety of size, shape, and stone used to create these magical objects, as well as to the consummate skill of Egyptian artisans, who were able to carve such delicate works of art from the most unyielding stones. The choice of stones used here – carnelian, haematite, lapis lazuli – suggests patrons of high status.

The amulets in this group denote a range of meanings. The frog, Bastet in the form of a cat, and Taweret amulets are all associated with fertility, childbirth, and regeneration, and were regularly worn by women in order to harness the fecundity of the respective deity and to offer protection to offspring. The sphinx represented one of the most potent images of strength and guardianship, whilst the image of Thoth, here in the form of a baboon, signified wisdom and the power of speech and writing. Amulets of the baboon of Thoth become more popular in the Ramesside period, appearing amongst tomb goods in order to encourage the god to approach judgement of the deceased with favour. They may also have been worn in life, especially by scribes yearning for guidance from their patron god.

Amulets continued in popularity into the Greek and Roman periods, where they also held magical significance. They were thought to imbue the wearer with particular qualities, offer protection, and in particular to safeguard against evil spirits. The haematite amulet of a recumbent dog depicts the animal in a moment of repose, its short fur incised, the eyes, ears and snout carefully delineated. In Roman society, as today, dogs were cherished pets, regarded as loyal guardians and fierce protectors of the home.

A comprehensive study of Egyptian amulets is presented by C. Andrews, Amulets of Ancient Egypt (Texas, 1994).