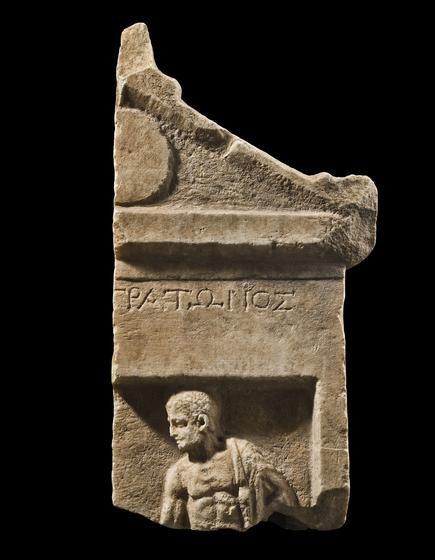 It was the custom in ancient Greece to erect funerary monuments to commemorate the deceased. For hundreds of years, from the Classical Period through the Hellenistic Age and even into Roman times, these elaborate memorials often took the form of a funerary stele, usually in marble. The most popular stele design was a naiskos, or miniature temple, with a triangular pediment above, and figures depicted within a niche below (usually the deceased with members of his household).  he erection of such a grave marker was a vital aspect of ancient burial ritual, which would celebrate the deceased by presenting them in their most idealized and glorious configuration – often young and athletic, or bearded and heroic – as the quintessential Greek citizen. The grave stelai would line the streets on the outskirts of cities, just beyond the city walls, so as travelers approached they would bear witness to the full glory of the ancestors of the citizens. The grandeur of one’s burial regalia was directly related to their status in life, and families went to great lengths to memorialize their loved ones with great aplomb.

The present example is a fragment of one such stele. Here, the artist has made great use of high relief, low relief and shadow to create a naiskos with a heavy architrave and acroteria.  Not unusually, the pediment is centered by a large disk, perhaps representing the sun or moon, or a shield device. The niche, in high relief, originally bore a scene with multiple figures, likely the deceased amongst his full family unit. Still presented is a male individual, who was very likely the deceased, depicted with his mantle draped over his shoulder as he looks intently toward the left. A portion of the deeply-engraved inscription in Greek is still preserved above, reading –ΤΡΑΤΩΝΟΣ, indicating to whom the memorial belonged. Like most other white marble sculptures in antiquity, grave stelai, the present example included, would originally have been brightly painted, vibrantly bringing back to life the deceased as if presented on stage. Bestowing great honour on the since-passed loved one and his family, this monument ornately commemorated and celebrated a Greek citizen, forever capturing him in an interactive gesture, assuring his own glorious immortality in stone.