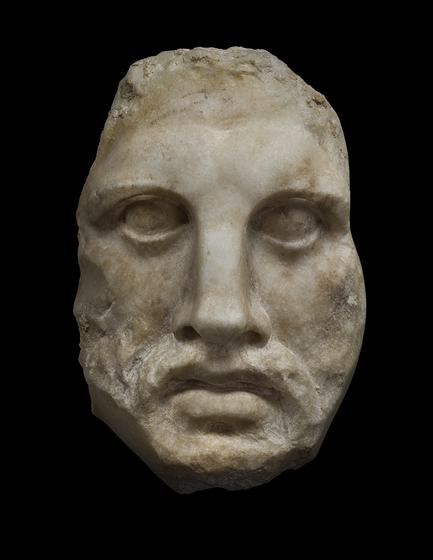 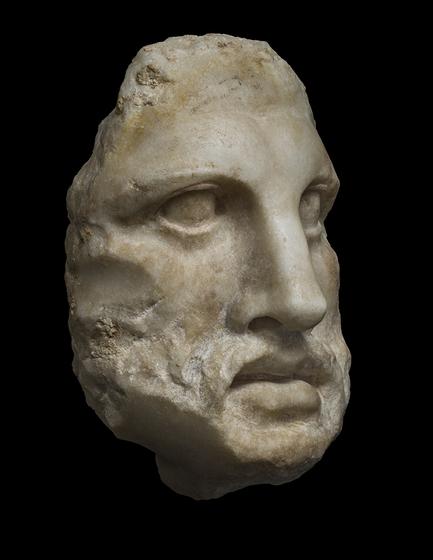 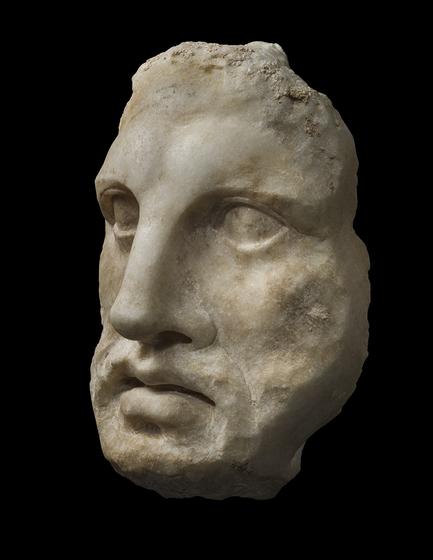 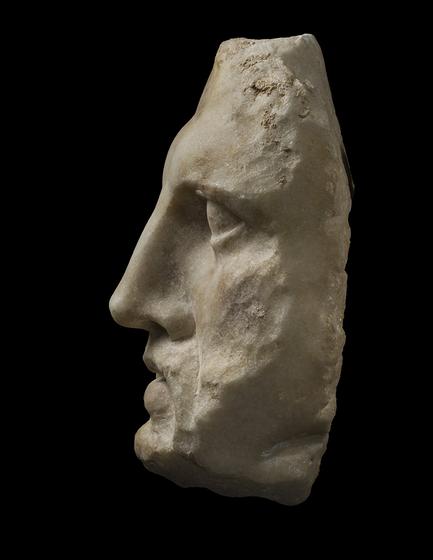 The Egyptian god Serapis was a synchretistic deity popularized during the reign of the earliest of the Ptolemaic kings in order to unite the Greek and Egyptian populations of cosmopolitan Alexandria. Serapis was depicted with classical physical features, but embodied many of the powers and attributes of the Egyptian principal deities Osiris and Apis. As a benevolent healer and overseer of the afterlife, Serapis also came to be identified with the classical deities Asklepios, Dionysos, and Hades.  In Ptolemaic and Romano-Egyptian religion, Serapis was worshipped as the consort of Isis, and they were celebrated together in illustrious colossal precincts, the most celebrated of which was in Alexandria. In the Serapaeum of Alexandria, Serapis’ cult statue, sculpted by the celebrated Greek Sculptor Bryaxis, portrayed him with a full beard, as here, regally robed and enthroned. In his left hand he held a sceptre, while his right hand rested on Cerberus, the three-headed dog who guarded the entrance to the underworld in Greek mythology.

The iconography chosen for Serapis was particularly strategic for the Ptolemies.  They chose an anthropomorphic or human-like representation for the deity, as the Greeks traditionally did not welcome the Egyptian iconography of animal-headed figures into their pantheon. The attributes of the afterlife and the underworld were recognized by Egyptians and Greeks alike, with the classical symbol for the land of the dead, the modius, or grain-measure, placed on the god’s head. For an example, see the Roman period bust of Serapis from the British Museum (acc. no. 1805,0703.51) with the characteristic modius, full beard, and three cork-screw curls at the center of his forehead.

The present example was likely part of a composite sculpture of Serapis, with much of the detailing presented in contrasting stone and plaster. The area around the beard, for instance, is roughly chiseled to receive adhered curls. The full supple lips, strong nose and broad thickly-lidded eyes are typical of the god’s powerful and recognizable physiognomy. The unarticulated nature of the eyes is a testament to the Hellenistic dating for this sculpture. Similarly, composite sculptures were especially prevalent during the late Ptolemaic Period, particularly at Alexandria. A strikingly similar example belongs to the Staatliche Kunstsammlungen Dresden, Skulpurensammlung (inv. no. ZV 2600 A 010), and another to Alexandria National Museum, inv. no. 3385.

Composite in its sculptural configuration, as well as in his nature as a synchretistic deity, this commanding face of Serapis exemplifies the formidable disposition of this unique cult. Encompassing only the face itself, the work manifests a strangely beguiling presence. Worship of Serapis spread throughout the Graeco-Roman world as a deliberate endeavour by the Ptolemaic kings. They were so successful in their pursuit that, by the Roman period, the cult of Serapis found favour in every major Roman city across the empire. An even further heightened Egyptomania in the second century under the Emperor Hadrian brought the popularity of Serapis to a new zenith, when the Emperor oversaw a refurbishment of the cult statue in Alexandria and built an elaborate Serapeum at his own country estate in Tivoli.

John Jermain Slocum (1914-1997) built the foundation of his antiquities collection while serving as US cultural attaché to Egypt in the 1960s. Upon his return to the US, he was the Assistant to the Director of The Smithsonian, he was appointed by President Reagan to the Presidential Cultural Property Advisory Committee, and he was a Trustee Emeritus of the Archaeological Institute of America. Slocum was a renowned and venerable collector. His collection of Medieval Crusader coins were sold in a single-owner sale at Sotheby's, London, in 1997.