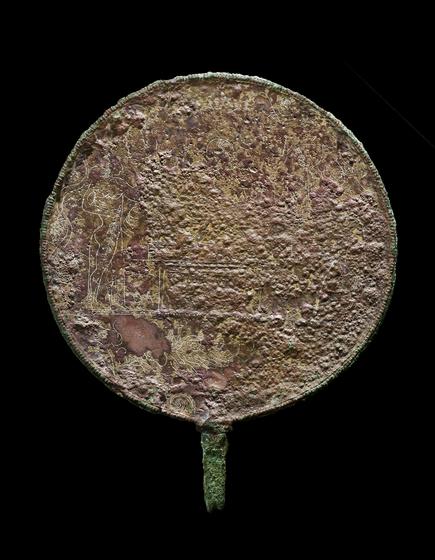 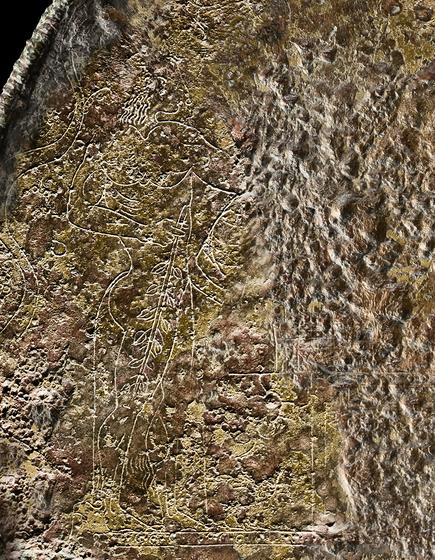 The mirror is one of the most characteristic, and charismatic, of Etruscan creations. Produced from the late sixth to second century BC, these beautiful bronzes have come to be regarded as something of an Etruscan speciality. Functioning not only as useful implements of a lady’s toilette, but also as objects of art and status symbols, their elemental form and intricate, stylized scenes have become synonymous with this fascinating and powerful civilization, which flourished in central Italy from the eighth to third century BC. These objects in particular epitomize the Etruscans’ mastery in bronze working, the unique fusion of Etruscan and Greek traditions, and the love of luxury for which they are so renowned.

Etruscan art was in many ways a very private art; aristocratic and opulent, but very focused on the life of the family and the notion of a continuing life in the tomb. Mirrors were cherished possessions of aristocratic women; they appear on wall paintings carried by maidservants, and were often given as part of a dowry. Their importance is also attested by the fact that many were deposited in tombs in Vulci, Tarquinia, Cerveteri, and Chiusi, their iconography carrying important connotations of immortality. The Etruscan master bronze smiths would form the circular disk by casting, followed by hammering and annealing. The reflective side was usually made convex, resulting in an image that would be smaller than reality, but would reflect more of the subject than a flat surface. The handle was formed by casting the mirror with a tang at the bottom, as visible on the present example. This tang could then be inserted into a handle made from ivory, bone, or wood.

The graceful proportions and skillfully incised scene on the present example indicate the hand of an accomplished craftsman and artist. Ancient metal engraving was an exacting technique that allowed very little margin for error, since the artist was wholly reliant upon outline drawing. In keeping with their function and role in the women’s sphere, the engraved designs on mirrors generally involve scenes of wedding preparations, feasting, couples embracing or ladies dressing. From the fourth century onwards, the majority depict scenes of myth, usually concerning aspects of beauty or allusions to fertility and immortality, such as Helen of Troy and the Judgement of Paris, or the Dioskouroi. However, the present mirror is a rare example dating from the Archaic period (circa 525-450 BC), when artists favoured light-hearted domestic scenes of dancing, banqueting, and music-making.

Though the natural patination of the bronze has obscured some of the composition, it is possible to discern a nude slave boy on the left, carrying a laurel branch, advancing towards a couch on which recline a male and female. According to convention, they are reclining right to left. Stylistic flourishes and certain aspects of detail indicate an archaic date – the figurative style of the slave boy betrays Ionian Greek influence, with the heavy thighs and long, trailing hair. The pose, too, with head in profile, frontal shoulders, and profile legs, is an archaic trait. The female figure wears a conical hat, known as a tutulus, which also suggests a date close to 500 BC, since these were very fashionable among Etruscan ladies during the late sixth to early fifth century. The border appears to consist of vines, with clusters of grapes, again, an archaic decoration, interspersed with wave patterns. A mirror with a similar composition, but lacking the same refinement of execution, belongs to the collection of the Villa Giulia, Rome.

It is generally understood that Etruscan women were more liberated than their Greek and Roman counterparts, enjoying greater participation in society. That their behavior was subject to few restrictions was considered alien, even scandalous, to their contemporaries; as the Greek historian Theopompus commented: ‘They [Etruscan women] do not share their couches with their husbands but with the other men who happen to be present, and they propose toasts to anyone they choose. They are expert drinkers and very attractive.’ Whilst other accounts from this source should be treated with scepticism, mirrors such as ours, and other works of art, including wall paintings, confirm that ‘respectable’ women, as opposed to just slave-girls or courtesans, did attend dining and drinking parties together with men.

The thick encrustation that now covers part of the engraved side on our mirror adds a unique texture to the surface, almost like thick layers of paint on a canvas. Underneath, the gleaming, glinting gold –  the original colour of the bronze – shines through, hinting at the object’s original splendour, refusing to be completely eclipsed by the ravages of time. Just as the mirror’s gleaming surface once reflected back its owner’s image, so the engraved depiction reveals to us a glimpse of her identity.