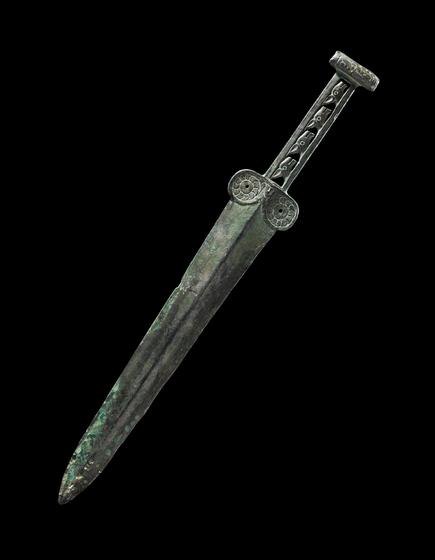 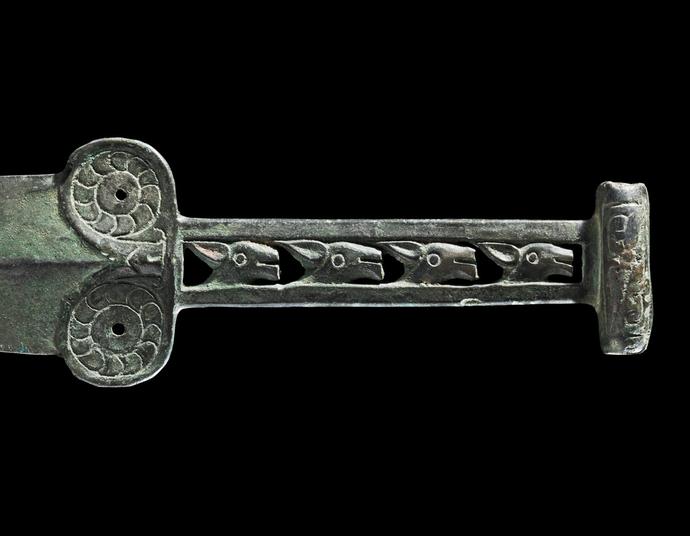 Intricate bronze instruments, weapons, and ornaments characterize the artistic repertoire of the steppe people, the nomadic herding and horse-riding neighbours of China’s northern frontier. The array of objects reveal aspects of their daily life, the harsh environment they endured and, above all, their talented artistry. Their work demonstrates a love of adornment, detail, and an aesthetic that captures the wildness of the natural environment and the animal kingdom. The present dagger, complete with geometric and zoomorphic motifs, epitomizes the herdsmans’ ability to create richly decorated portable objects of functional and social importance.

The dagger or short sword was a typical tool of the pastoral peoples inhabiting north-western China from the late Shang period (thirteenth to eleventh centuries) onwards. Testament to the often fractious relationships between rival tribes, as well as to the harsh natural environment, daggers were also buried with their owners as symbols of high status. On this example, the top of the handle takes the form of a hollow tube decorated with geometric patterns. In some cases, a perforation runs through the tube, to allow for suspension. The handle is narrow and strap-like, with the central openwork section depicting four deer heads in profile. Their ears are represented by simple petal-shaped forms, and their eyes by circles, which gives them a wide-eyed, alert expression. Does and deer were popular subject-matter on bronze ornamentation from northwest china and southwest inner Mongolia during this period, for example, on yoke ornaments, finials, and other fittings. The recumbent deer seems to have been a particularly significant image that permeated the art of the Eurasian steppes, with regional variations and traditions. The flattened muzzles of the deer on this example are a characteristic feature associated with northwest China.

The hand-guard takes the form of what appears to be the stylized horns of a ram, perhaps derived from back-to-back raptor head imagery used in south central inner Mongolian daggers of the same period. The reciprocal influence among the different peoples of the Steppes and the Chinese world, demonstrated by their preferred iconography and stylistic choices, suggests that exchange offered a means of expression of their way of life.

A similar dagger with a flat, strap-like hilt and hollow, narrow pommel is in the Arthur M. Sackler collection (acc no. V-7320), and a dagger excavated in Guyuan county, Ningxia, displays the same blade and spiral guard.

For more on the inhabitants of Northwest China, J.F. So, and E. C. Bunker, Traders and Raiders on China’s Northern Frontier (Washington, 1995).