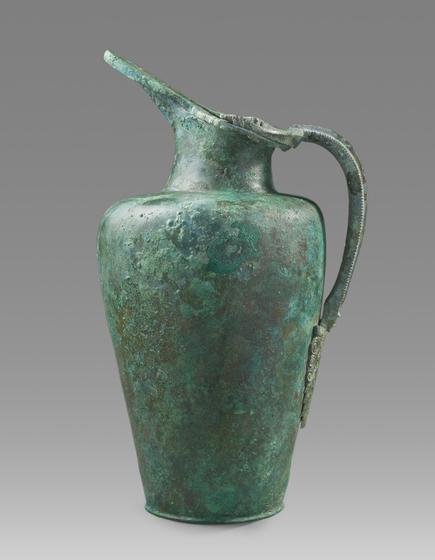 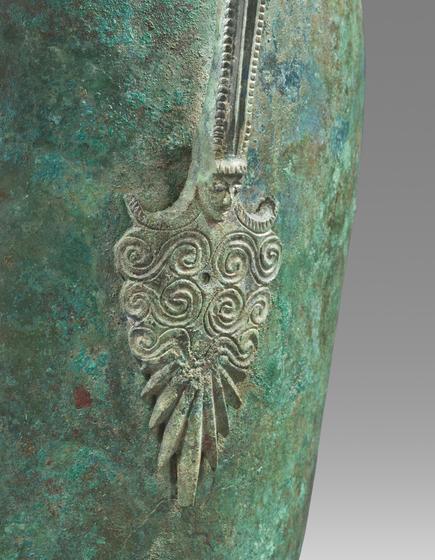 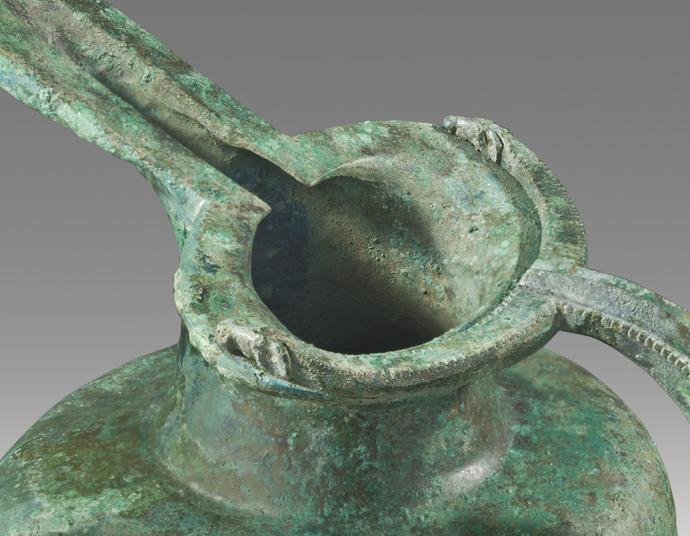 The Etruscans were renowned in antiquity and continue to be admired through to the present day for their masterful metalwork. Aesthetic achievement and ingenuity were paramount to the Etruscan craftsman, who consistently drew inspiration from their neighbours while providing their own unique interpretive twist on everything from humble tableware to monumental sculpture.

This elegant profile of the fifth century bronze beaked flagon is one such example of Etruscan metal-smithing innovation. The flagon, or oinochoe, is a single-handled ewer, taller than it is wide, that was used relatively universally in the Greco-Roman world for pouring wine. After mixing wine with water in a large krater, the liquid would be decanted into a smaller vessel, such as the flagon. The form had several variations throughout classical antiquity, with distinctions in the shape of the body, the pouring spout and the handle.  Many oinochoai display a trefoil mouth, in order to temper the pouring speed and enhance precision. The outline of the present vessel, with its long, angled spouted lip, is one of the most distinguished types not only for its beauty but for its efficiency, with form perfectly meeting function.

The present example is especially handsome, with its high broad shoulders and elongated body that tapers gracefully toward the disk base. The thick, flanged mouth is punctuated by the separately-cast handle that bifurcates along the upper surface of the outer lobes. The arms terminate in animal heads, while the edges are meticulously incised with ribbing and ovolo. The base of the arching handle uniquely features a shield-shaped terminus surmounted by a human mask with a fringe of hair and long curving plaits that top the handle plate. It is embellished with cold worked scrolling and it ends below in pointed palmette petals.

This uniquely Etruscan flagon form likely originated in the environs around Vulci, near the west coast of central Italy in the mid fifth century BC. It became an especially popular object of export and imitation, especially in the Celtic arena of Central Europe, where it was used for pouring mead, wine and beer. One can see the inspiration of the Etruscan form emulated in the renowned Basse Yutz flagons in the British Museum, which are purely Celtic inventions.

Our exemplary ewer is archetypal for the Etruscan class.  There is a similar example with comparable elegance and refinement in the Metropolitan Museum of Art, New York, inv. no. 12.160.3, as well as in the Museum of Fine Arts, Boston, inv. no. 96.711. The upturned beaked spout fell out of fashion later in the fifth century and disappeared entirely from the repertoire of oinochoe shapes soon after. It remains for the modern aesthete the consummate example of Etruscan mastery and innovation of metalwork, leaving its distinctive form, and its derivatives, as highlights of the timeline of ancient utilitarian vessels.